A new variety of wheat that is rich in fiber developed by a team led by an Indian scientist has the potential to help fight Type 2 diabetes and bowel cancer.

The discovery is considered significant for India, which is often labeled the 'diabetic capital of the world', with over 50 million people suffering from the disease.
Wheat Variety With 10 Times More Fiber To Fight Diabetes, Bowel Cancer


The new wheat variety is rich in amylose, a type of dietary fiber which resists digestion. Products made from high-amylose wheat was 10 times more fiber than those made from regular wheat. Also, resistant starch is known to improve digestive health, protect against the genetic damage that precedes bowel cancer.


‘The new wheat variety with an increased component of amylose or resistant starch can help keep blood sugar levels in check and prevent the development of bowel cancers.’


Normally, food is digested in the small intestine. This starch reaches the large intestine and disintegrates there, which reduces the speed with which glucose reaches the blood, said Dr. Regina Ahmed, principal research scientist, Commonwealth Scientific and Industrial Research Organisation (CSIRO).

High-amylose Wheat: How was it made?

The research team initially identified two enzymes that when reduced in wheat, increase the amount of a polysaccharide known as amylose.

"From there, we used a conventional breeding approach, not GM techniques, and managed to increase the amylose content of wheat grain from around 20 or 30 percent to an unprecedented 85 percent," said Dr. Ahmed.

"This was sufficient to increase the level of resistant starch [a type of dietary fiber] to more than 20 percent of total starch in the grain compared to less than one percent in regular wheat."

High-amylose starches are more resistant to hydrolysis or digestion than conventional starches. Resistant starch (RS) passes through the oral, gastric and small intestinal phases of digestion. The microbes in the large intestine ferment the fiber and releases short-chain fatty acids including butyrate, which contributes to enhanced colonic function.

Imparting nutritional benefits to staple foods like wheat would have a meaningful impact on public health, without the need for making major dietary changes.

"There is a rapid spread of lifestyle diseases across the world. Type 2 diabetes is now a global health challenge with a mounting incidence in most nations, including developing countries like India," said Dr. Ahmed.

She added, "India is one of the leading producers of wheat and almost all the wheat that India produces is consumed domestically. This means that wheat with enhanced nutritional quality can serve as an excellent vehicle for delivery of health benefits to consumers."

Gluten in Wheat, Rye, Barley Reduces Risk Of Type 2 Diabetes
Gluten-free diet has gained popularity though it has no effect on health but avoiding gluten-rich foods may increase the risk of diabetes.
READ MORE 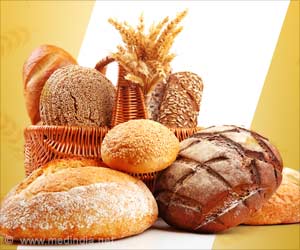 Which Bread is Healthier? White or Whole Grain Wheat Bread?
Whole wheat sourdough bread is considered healthy as it is prepared without any additives and is high is fiber and minerals compared to white bread.
READ MORE

Top 5 Health Benefits of Wheat Germ
Wheat germ is a storehouse of nutrients. Read on to know more about how it benefits the body, its rich nutritional profile and how it is used in recipes.
READ MORE