Snake Bite: How to Easily Halt the Spread of Snake Venom

Written by Madhumathi Palaniappan
Medically Reviewed by The Medindia Medical Review Team on March 8, 2017 at 6:17 PM 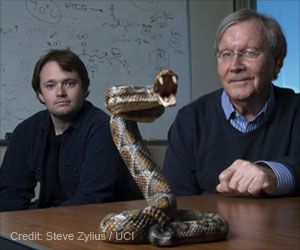 A new way to neutralize the deadly snake venom was developed by a research team from the University of California. This could halt the venom spread in a more cheap and effective way than the traditional anti-venom. The new innovation can spare the loss of millions of people's life or limbs every year.

How to Handle Snake Bite
If a person is bitten, running after the snake to catch it may not be a good idea.Here are some tips that would guide you in the event of snake bite!
Advertisement
‘The spread of poisonous snake venom can be easily halted in a cheap and effective way by using the newly synthesized nanogel material.’

In rural parts of India and sub-Saharan Africa, more than 100,000 poor children and farmworkers die due to snake bite.


The number of deaths due to snake bites are rare in the United States, it is only around 5 every year. However, the new treatment can be useful for dog owners, bikers and enthusiasts against nature at the ankle level.

Snake Bites - First Aid and Emergency Treatment Guide
Snake bite from a venomous snakes like King Cobra, Russell viper can be deadly. A quick and simple First Aid guide on Snake bite treatment and management.
Advertisement
The existing treatment of antidote may halt the damage caused by the snake bite and requires slow intravenous infusion at a hospital and may cost around $100,000.

Jeffrey O'Brien, lead author of the study, said, "Current anti-venom is very specific to certain snake types. Ours seems to show broad-spectrum ability to stop cell destruction across species on many continents, and that is quite a big deal."

The research study was published in the Journal of the American Chemical Society.

The research team has synthesized a polymer nanogel material which is capable of binding to several key protein toxins, that would burst and cause destruction.

O'Brien, found that some type of anti-venom property was expected as the human serum samples in the test tube stayed clear without turning scarlet due to the rupture of red blood cells by the venom.

Ken Shea, Chemistry professor, senior author, explained snake venom to be a 'complex toxic cocktail' which can stay ahead of prey's adaptive strategies. This is being absorbed on the surface of nanoparticles in the new material which can divert from doing harm.

Nanodote compound has a long shelf life and is cost-effective when compared to the existing antidote which is made by injecting the horses with venom and waiting for several weeks to develop antibodies. This is then extracted in their blood and shipped from Mexico or Australia to other places that can afford. This process is not allowed in the U.S. and major suppliers have discontinued shipments to many markets.

O'Brien, said, "Our treatment costs pennies on the dollar and, unlike the current one, requires no refrigeration."

"It feels pretty great to think this could save lives."

These findings also discover that scorpion and spider bite infections can be slowed or stopped through this invention. Patents are pending and make seek public and private funding to move forward with clinical trials and product development.

The research team has also pioneered a synthetic antidote for bee meliteen which is present in stings and can also kill people who have allergic reactions.

"The goal is not to save mice from venom and bee stings," Shea said. "But to demonstrate a paradigm shift in thinking about solutions to these types of problems. We have more work to do, and this is why we're seeking a fairly significant infusion of resources."

The first phase of the laboratory work was funded by The U.S. Department of Defense's research arm. The author concluded that the innovative medic in the backpack may help soldiers and military who are bit by toxic snakes to delay the spread of the venom.

The Unique Ritual of Getting Bitten by Snakes Celebrated by Tribals in Jharkhand
In order to please the Hindu deity Mansa Devi, tribals in Jharkhand celebrated their traditional festival during which the devotees practice a unique ritual of being bitten by snakes .