Written by Julia Samuel
Medically Reviewed by The Medindia Medical Review Team on April 5, 2017 at 5:17 PM 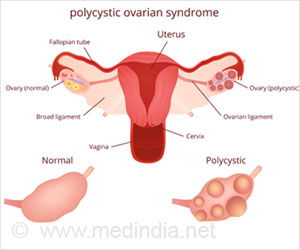 Polycystic Ovarian Syndrome
Polycystic ovarian syndrome is the most common hormonal disorder among women of reproductive age and can cause infertility.
Advertisement
‘SPIOMET had a 2.5-fold higher ovulation rate and a 6-fold higher prevalence of normal ovulation; and the risk of having abnormally few ovulations was 65% lower when compared with oral contraceptives.’

"While no treatment is licensed for PCOS, roughly 98 percent of girls who have it, whether or not they are sexually active, take a combined oral contraceptive pill that contains an estrogen and a progestagen," said Ibáñez.


Contraceptive pill or SPIOMET for PCOS?

In a study conducted at the University of Barcelona, Ibáñez and her colleagues enrolled 36 young women with PCOS who averaged 16 years of age, were non-obese and not sexually active. They had had their first menstruation at least two years before; and their excessive body hair and irregular menses could not be attributed to specific causes. Overall, 34 girls completed the study.

Women Unhappy With the Long Waiting Periods For Polycystic Ovarian Syndrome Diagnosis
Many women wait for years before diagnosis of PCOS, the common reproductive, metabolic health problem, finds survey.
Advertisement
The participants were randomized to receive one of two drug combinations daily for 12 months. Some took a combined oral contraceptive pill containing 20 mcg ethinyl-estradiol plus 100 mg levonorgestrel; others took SPIOMET, (spironolactone 50 mg, pioglitazone 7.5 mg, and metformin 850 mg). The girls were also encouraged to do regular exercise and eat a Mediterranean diet.

Young women with PCOS had more visceral and hepatic fat than age-matched controls, as well as higher androgens and insulin, and altered markers of cardiovascular health before the treatment.

During treatment, those taking SPIOMET normalized more hepatic and visceral fat, insulin and markers of cardiovascular health; and after treatment, these values remained more normal in the girls who took SPIOMET than in those on oral contraceptives.

Compared with oral contraceptives, SPIOMET was followed by a 2.5-fold higher ovulation rate and a 6-fold higher prevalence of normal ovulation; and the risk of having abnormally few ovulations was 65% lower. The girls who lost the most hepatic fat were those who ovulated more after treatment.

PCOS In The Mother Increases Risk Of Autism In The Offspring
Women with polycystic ovarian syndrome (PCOS) have increased levels of androgens even during pregnancy, which increases the risk of autism in children.

Study Finds Women Likely to Doubt Their Choice of Partners During Ovulation
Researchers at UCLA have found that women continue to have doubts whether they have made the right decision long after they have chosen 'stable' mates.

Top Foods To Improve Fertility
News Archive
News Resource
Advertisement
News Category
Milestone In Voluntary Blood Donation Achieved Samsung Reinvents Toilet for the Poor Which is a Better Form of Exercise: Daily or Weekly? First Phase of Foot-and-Mouth Disease Vaccination Shocking News: Polio Cases Return After a Decade in the US
More News
Sign up for Wellness Consult a Doctor Sign up for Selfcare

Drug - Food Interactions The Essence of Yoga Indian Medical Journals A-Z Drug Brands in India Color Blindness Calculator Hearing Loss Calculator Accident and Trauma Care How to Reduce School Bag Weight - Simple Tips Sinopril (2mg) (Lacidipine) Turmeric Powder - Health Benefits, Uses & Side Effects
This site uses cookies to deliver our services. By using our site, you acknowledge that you have read and understand our Cookie Policy, Privacy Policy, and our Terms of Use