Women previously diagnosed with mood disorders are at higher risk of developing postpartum depression if they have lower levels of the hormone allopregnanolone during the second trimester of pregnancy.

The study conducted by a research team at the Johns Hopkins is published in Psychoneuroendocrinology. The study suggests that the findings could lead to diagnostic markers and preventive strategies for postpartum depression.
Postpartum Depression Likely In Women With Low Anti-Anxiety Hormone


‘Women with lower levels of the hormone allopregnanolone during the second trimester are identified as being at risk for postpartum depression.’

"Many earlier studies haven't shown postpartum depression to be tied to actual levels of pregnancy hormones, but rather to an individual's vulnerability to fluctuations in these hormones, and they didn't identify any concrete way to tell whether a woman would develop postpartum depression," says Dr Lauren M. Osborne, assistant director of the Johns Hopkins Women's Mood Disorders Center and assistant professor of psychiatry and behavioral sciences at the Johns Hopkins University School of Medicine.

"For our study, we looked at a high-risk population of women already diagnosed with mood disorders and asked what might be making them more susceptible."

Low Levels of Hormone Allopregnanolone Linked to Postpartum Depression
The study involved 60 pregnant women between the ages of 18 and 45. The participants were recruited by investigators at The Johns Hopkins University and the University of North Carolina at Chapel Hill.

During the study period, 76 percent of the participants used antidepressants and mood stabilizers. About 76 percent were depressed at some point of the investigation.

Each participant underwent a mood test and blood test during the second trimester (20 weeks pregnant) and the third trimester (34 weeks pregnant). Forty people participated in the second-trimester data collection. The participants were assessed by a clinician using the Diagnostic and Statistical Manual of Mental Disorders, version IV for a major depressive episode. Out of the 40 participants, 19 (47.5 percent) developed postpartum depression at one or three months postpartum. Fifty-eight women participated in the third-trimester data collection, out of which, 25 (43 percent) of the women developed postpartum depression.

The blood tests were used to measure the blood levels of progesterone and allopregnanolone, which is a byproduct made from the breakdown of progesterone and known for its calming and anti-anxiety effects. According to the study data, a woman with an allopregnanolone level of 7.5 nanograms per milliliter had a 1.5 percent chance of developing postpartum depression. The risk of developing postpartum depression dropped by 63 percent for every additional nanogram per milliliter increase in allopregnanolone.

"Every woman has high levels of certain hormones, including allopregnanolone, at the end of pregnancy, so we decided to look earlier in the pregnancy to see if we could tease apart small differences in hormone levels that might more accurately predict postpartum depression later," says Osborne. She says that many earlier studies on postpartum depression focused on a less ill population, often excluding women whose symptoms were serious enough to warrant psychiatric medication -- making it difficult to detect trends in those women most at risk.

"We believe that many, if not most, women who become pregnant are undertreated for their depression because many physicians believe that smaller doses of antidepressants are safer for the baby, but we don't have any evidence that this is true," says Osborne. "If the medication dose is too low and the mother relapses into depression during pregnancy or the postpartum period, then the baby will be exposed to both the drugs and the mother's illness."

Osborne said that Johns Hopkins is one of the several institutions currently participating in a clinical trial led by Sage Therapeutics that is looking at allopregnanolone as a treatment for postpartum depression. 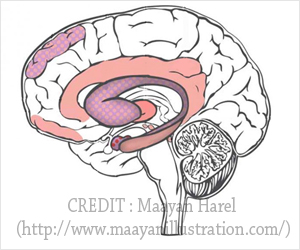 Postpartum Depression and Anxiety Differ from Other Mood Disorders
Mood disorders during the postpartum period are neurobiologically distinct from these disorders at other times in one's life.
READ MORE

Gestational Diabetes Increases Postpartum Depression Risk
Women with a history of depression are more than 20 times more likely to experience depression than mothers without a previous clinical diagnosis of depression.
READ MORE