Written by Hannah Joy
Medically Reviewed by The Medindia Medical Review Team on March 17, 2018 at 8:24 PM 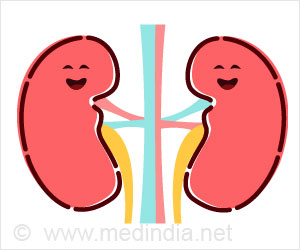 A drug was found to be associated with fat regulation, which aids in the prevention of kidney stone formation.

This study opens new possibilities for developing drugs that can help prevent kidney stones in at-risk individuals. Passing a kidney stone in the urine is considered as the worst pain ever.

Obesity Affects Anti-VEGF Therapy in Breast Cancer Patients
Obesity promotes resistance to antiangiogenic therapy in breast cancer patients. Individuals with high BMI had increased levels of pro-angiogenic and inflammatory factors.
Advertisement
‘£]3-agonist is the drug that helps reduce the expression of adipocytokine molecules that are linked to inflammation, and can prevent kidney stones.’

The study was presented at the European Association of Urology Conference, Copenhagen.


The developed world is experiencing something of an epidemic of kidney stones.

The EAU estimates that about 50 to 60million Europeans suffer from kidney stones, i.e., 1 in 11 Europeans, which is equivalent to the population of a vast European country like the UK, France or Italy.

Spiked Canadian Obesity Rate may Lead to Higher Cancer Burden
Reducing the number of overweight and obese Canadians could potentially prevent a lot of cancer cases by 2042.
Advertisement
Also, the US has a similar number of sufferers. Kidney stone incidence has nearly doubled over the last 20 years.

Doctors think that this increase is due to increasing obesity, and diet and lifestyle changes.

A group of Japanese scientists has discovered that an experimental drug can reduce the number of kidney stones in mice. They gave 20 mice 1mg/kg of the £]3- agonist CL316243 for 12 days.

Then the mice, plus 20 controls, were then injected with glyoxylate, which causes the formation of kidney stones.

At various time points, the mice were then checked to see if they had formed stones: the formation of stones decreased to 17.0 percent in the experimental group, compared with the controls.

Dr. Teruaki Sugino also said, "But I believe that this may open the way to the development of the new drugs which can stop the development of kidney stones in at-risk people. So far we have only tested this on mice, but in mice, it seems to work."

They were able to analyze the biochemical differences between the control and experimental group. The results showed that the £]3-agonist reduced the expression of adipocytokine molecules that are linked to inflammation.

The research team believes that free fatty acids cause inflammation and cytotoxic effects in kidneys that lead to kidney stones.

£]3-agonists are known to cause fat white cells (which are found in excess in overweight and obese persons) into beige fat cells, which burn extra calories, which is why these molecules are also being considered for anti-obesity uses.

The research team suspects that beige cells absorb free fatty acids, which could be the cause of inflammation in the kidneys that leads to kidney stones. This means that £]3-agonists have the potential to prevent obesity and also kidney stones.

Professor Thomas Knoll (Universitª¼t T¬Übingen, Germany) said, "Renal stones affect many people and have a high economic impact, so it's a pity that we still have an only rudimentary understanding of why stones form."

Metabolic factors play an essential role, and this work contributes to unraveling the pathogenesis.

Scientists reveal that there have been decades of urine crystallization studies and have not still advanced in the field. However, they hope that this study could lead more researchers investigating on this topic. (Professor Knoll was not part of this study, and it is an independent comment).

Currently, potassium-sodium citrate drugs are being used to stop the development of kidney stones. However, these drugs cannot be used by some people, as they need to limit their intake of potassium and sodium.

The limitations of the study were that it had been conducted on animals and so cannot be applied to humans. The molecule has not yet been tested for its tolerability, efficacy, or cost. This is an initial 'proof-of-concept' study and needs to be done on the much larger sample.

Obesity in Women Linked to Early Puberty
Early puberty in girls is associated with increased BMI in adulthood. Mendelian Randomization technique was used to study the relationship between early puberty and obesity.

Advertisement
<< Use of Anesthesia on the Fetus in an Open Fetal Surgery Migh...
Diabetes Drug may Help People With Obesity Lose Weight >>

Obesity Linked With an Increased Risk of SSI After C-Section
A postoperative 48-hour course of antibiotics significantly decreases the rate of surgical site infection within 30 days after delivery among obese women.

Vesico-Ureteric Reflux Causing UTI in Children
News Archive
News Resource
Advertisement
News Category
Milestone In Voluntary Blood Donation Achieved Samsung Reinvents Toilet for the Poor Which is a Better Form of Exercise: Daily or Weekly? First Phase of Foot-and-Mouth Disease Vaccination Shocking News: Polio Cases Return After a Decade in the US
More News
Sign up for Wellness Consult a Doctor Sign up for Selfcare

Drug Side Effects Calculator How to Reduce School Bag Weight - Simple Tips Find a Hospital A-Z Drug Brands in India Color Blindness Calculator Nutam (400mg) (Piracetam) Daily Calorie Requirements The Essence of Yoga Calculate Ideal Weight for Infants Pregnancy Confirmation Calculator
This site uses cookies to deliver our services. By using our site, you acknowledge that you have read and understand our Cookie Policy, Privacy Policy, and our Terms of Use