Have a Healthy Breakfast, Avoid Diabetes

A study presented at The Endocrine Society's 95th Annual Meeting in San Francisco, suggests that skipping breakfast regularly may lead to insulin resistance thus increasing the risk for type-2 diabetes.

"Eating a healthy breakfast is probably beneficial. It may not only help you control your weight but avoid diabetes," says Dr. Elizabeth Thomas, an instructor of medicine at the University of Colorado and the lead author of the study.


Nine non-diabetic, overweight or obese women, with an average age of 29, were chosen for the study. Their levels of insulin and blood sugar were measured on two different days after the women ate lunch. On day one, measurements were taken after breakfast; on the other day, readings were taken after they skipped breakfast. It was found that on the day they skipped breakfast, the study subjects required "a higher level of insulin to handle the same meal."

"This is a small, but very interesting, study," said Dr. Ping Wang, director of the University of California, Irvine, Health Diabetes Center. "The findings will have to be verified with larger studies."

The study is not confirmatory, and more research is warranted. The study just suggests an association between skipping breakfast and higher insulin levels. Despite lack of conclusive evidence, doctors advocate against either skipping meals or eating very frequent meals. "Studies done in Europe have shown that a large meal in the middle of the day is better than a large meal at dinner," said Dr. Joel Zonszein, a professor of clinical medicine at the Albert Einstein College of Medicine and director of the Clinical Diabetes Center at Montefiore Medical Center, in New York City.

Statistics reveal that 61.3 million people in India had diabetes in 2011. That figure is projected to rise to 101.2 million by 2030 according to the International Diabetes Federation. India has more diabetes than the United States; and is second only to China in diabetes prevalence. 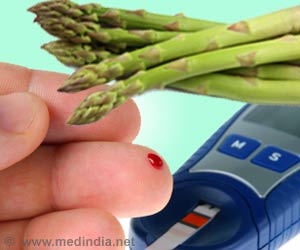 Asparagus Can Ward Off Diabetes
Researchers have revealed that asparagus a common vegetable has the potential to fight diabetes.
READ MORE

Risk of Kidney Stones Increases With Obesity, Diabetes, and Gout
Risk of kidney disease has almost doubled since 1994 in American people and the researchers from the UCLA think that it is directly connected with the rise in metabolic syndrome.
READ MORE