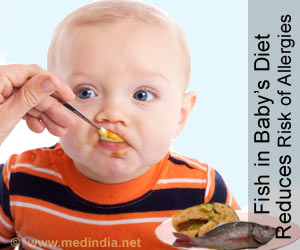 Regular fish consumption in infancy may reduce risk of allergic disease up to age 12 years, according to the findings of a joint research from the Department of Clinical Science and Education, Karolinska Institute and the Department of Pediatrics, Sachs' Children's Hospital, in Stockholm, Sweden.

The study published in the American Journal of Clinical Nutrition was conducted to investigate whether fish intake in infancy reduced risk of allergic disease as children grow older.

The researchers analyzed 3,285 children and used parental questionnaires when the children were of ages 1, 2, 4, 8 and 12 years to obtain information on lifestyle factors, environmental exposures, and symptoms of allergic disease. The frequency of fish intake in infancy was assessed in the 1-year questionnaire.


Eighty percent of these children at age of 1 year ate fish at least twice a month. The other 20 percent did not eat fish at all.

"We had in a previous study, with the same children, seen an association between fish intake in infancy and a reduced risk of allergic disease," said lead author of the study Jessica Magnusson, "but then we had only been able to study allergic disease up to age 4."

The team followed up with the present study with information up to 12 years of age to find out if the reduced risk lasted as the kids got older.

The results showed that including fish in the baby's diet as little as twice a month significantly reduced overall risks of prevalent and incident allergic disease.

The study had some limitations, however.

 The type of fish given to the children was not accounted for.

 Specific allergies were not studied independently.

"The most common food allergens differ between cultures. Where there is a high consumption of fish, there are less fish allergies," commented Jacqueline Pongracic, division head of allergy and immunology at Ann and Robert H. Lurie Children's Hospital. She said the study follows in the same direction as others by introducing food allergens earlier on.

The question some pediatricians are asking is when during infancy should the children be exposed to fish to prevent allergies? Further studies may be required to answer this question.

Advantages of Eating Fish Foods
Researchers worldwide have discovered that eating fish regularly is good for health. Regular consumption of fish may reduce the risk of diseases such as asthma, prostate cancer and eyesight.
READ MORE
Quiz on Allergy
Every season can be an allergy season, depending on what you're allergic to. - Clara ...
READ MORE