Enlarged Prostate May Not Need Surgery

Researchers claim that a new nonsurgical treatment called prostate artery embolization (PAE) may ease the symptoms of benign prostate hyperplasia (BPH), a condition with an enlarged prostate. BPH is commonly found in men over the age of 50; as the name suggests, it is benign, i.e. noncancerous. Enlargement of the prostate can cause symptoms that irritate or obstruct the urinary bladder.

Common Symptoms of BPH Include:


PAE works by blocking off the arteries that feed the prostate gland and making it shrink. PAE was first performed in 2009; it is performed by an interventional radiologist, rather than a surgeon.

"We have treated more than 100 patients with [prostate artery embolization] and are encouraged by the excellent reduction in symptoms and improvement in quality of life for men who have had the procedure, including some with very large prostates who normally would require open surgery," Dr. Francisco Carnevale, Associate Professor of Medicine at the University of Sao Paolo.

Researchers claim that 97 percent of the men who underwent PAE have experienced improvements in symptoms and quality of life. The study-recorded recurrence of symptoms in 14 percent of patients during a 15 month-long follow up.

"[However], none of our patients have experienced adverse side effects, and we have followed a number of them for several years -- longer than other studies," Carnevale said.

The validity of the observation is being widely debated; the results have been viewed skeptically by the scientific community since it was a relatively small and short study. Larger trials that compare PAE with the time-tested treatments available are mandatory before drawing premature conclusions.

It is however a promising observation that the research team has come with.

Nonsurgical Treatment Turns Back the Clock And Shrinks Enlarged Prostate: Study
A study suggests that men with a common condition that causes frequent nighttime trips to the bathroom can get relief with a minimally invasive treatment that shrinks the prostate.
READ MORE 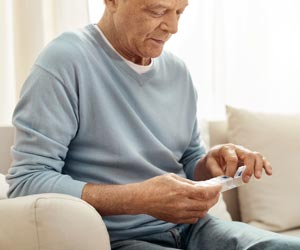 Drugs for Benign Prostatic Hyperplasia
Benign prostatic hyperplasia or enlarged prostate is a noncancerous condition observed in men above 50 years of age. It is not a life-threatening disease.
READ MORE