Written by Sheela Philomena
Medically Reviewed by The Medindia Medical Review Team on November 2, 2016 at 3:57 PM 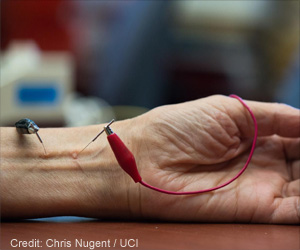 Electroacupuncture treatment was found to lower high blood pressure by increasing the release of a kind of opioid in the brainstem region that controls blood pressure.

In rats, electroacupuncture resulted in reduced blood pressure which lasted for at least three days by increasing the gene expression of enkephalins. Enkephalins are one of the 3 major opioid peptides produced by the body.

Blood Pressure Calculator
Blood pressure readings - what do the numbers mean? Use Medindia's blood pressure calculator to check whether you blood pressure is at healthy level.
Advertisement
‘Repetitive electroacupuncture evokes a long lasting action in lowering blood pressure in hypertension.’


Hypertension Facts and Statistics The research suggests that electroacupuncture therapy may be suitable for treating clinical hypertension.

Advertisement
<< Treatments For Spinocerebellar Ataxia Can Be Developed Using...
Related Immune Cells Can Now Be Distinguished By Molecular M... >>

Acupuncture for People With Brain Injury-related Headaches
Chinese acupuncture in treating patients with traumatic brain injury is seen to be effective in reducing recurrent head aches and improving quality of life.