Related Immune Cells Can Now Be Distinguished By Molecular Manipulation 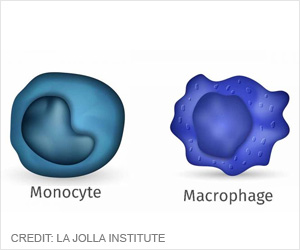 A next-generation molecular manipulation is aimed at inactivating gene Nr4a1 in a more precise manner, according to a latest study by Catherine C. Hedrick and colleagues.

Until now, scientists deleted a gene in a model organism like a mouse did it by clipping out stretches of DNA encoding entire genes or very big chunks of them from the animal's genome.

Advertisement
‘Selectively inactivating a molecular switch that turns on the gene Nr4a1 in monocytes but not macrophages leads to the loss of patrolling monocytes, which play an important role in suppressing lung metastasis in lung cancer.’

This type of gene "knockout" is what La Jolla Institute for Allergy and Immunology (LJI) investigator Catherine C. Hedrick, Ph.D., used in 2011, when her lab discovered that mice without the gene Nr4a1 lack an anti-inflammatory subtype of white blood cells, nicknamed 'patrolling monocytes'.


The study, published in the November 15, 2016, edition of Immunity, reports the loss of the same patrolling monocyte population following inactivation of a molecular switch that turns on Nr4a1.
Advertisement
"This new work is exciting, because it shows that we can directly target genes within a specific cell type, which is important for targeted therapies," says Hedrick, a Professor in the Division of Inflammation Biology.

The Hedrick laboratory's previous demonstration that patrolling monocytes disappear following global Nr4a1 loss proved that the gene is necessary for development of that cell type.

The Hedrick group silenced Nr4a1 only in patrolling monocytes by applying good old-fashioned biochemistry to isolate stretches of DNA that flank the gene and define the on-switch for monocytes.

Scientists call tissue-specific gene regulatory elements as "enhancers." They then showed that when activated, that DNA region, which they called "enhancer #2" (E2), was capable of switching on Nr4a1 expression only in patrolling monocytes, and not in macrophages.

"Until now, we did not have a way to delete a gene only in monocytes without also deleting it in macrophages," says Graham Thomas, Ph.D., a postdoc in the Hedrick lab and the study's first author. "Targeting the enhancer allows us to study particular cell types in a highly specific way," says Thomas. "Also, eliminating enhancers teaches us what turns these genes on in the first place. That knowledge is essential if we are going to design rational targets to go after these cells."

To confirm that macrophages throw an entirely different molecular switch to turn on Nr4a1, the group exposed mice missing the monocyte E2 switch to a noxious toxin found in bacterial membranes, as a way of seeing whether macrophages can still mount normal inflammatory responses.

Indeed, the macrophage response was entirely normal in E2 mutants, unlike the global Nr4a1 "knockout", showing that macrophages do not use the genetic E2 switch.

The lungs of mutant mice contained many more melanoma cells than did lungs of normal mice. This confirmed that the gene regulatory switch is highly specific to one cell type, monocytes and that tumor cell invasion in the absence of this population had nothing to do with deregulated macrophage activity.

Hedrick also thinks the new findings provide new understanding of just how important DNA enhancer regions can be. "Being able to selectively target specific cell types opens up a new world for understanding how to design therapies to treat disease," she says.

Genes may Guide Intelligence throughout Life
Ever wondered how your intelligence level is different from others? learn more about how genetic ......

Macrophages Play An Essential Role in Fast Tissue Repair
Macrophages play a key role in clearing the body of harmful substances and microbes, such as toxins ...

Natural Metabolite can Suppress Pro-Inflammatory Activity of Macrophages
A substance produced in humans that can suppress the pro-inflammatory activity of macrophages has .....