New unique 'lab-on-a-chip' test device can detect cancer in very small amounts of plasma in a simple and rapid test which is also inexpensive to perform.

The team focused on ovarian cancer for their study, cancer which is usually diagnosed when it is already advanced with high mortality rates and poor patient prognosis. By means of their test, the study team hoped doctors would be able to detect cancer early by means of this simple test with better patient outcomes.
Novel Lab-on-a-chip Device Detects Cancer Faster


‘New-lab-on-a-chip device uses nanopatterning technology which is devoid of any fancy or elaborate equipment. The test is simple and easy to perform even by a high school student. It is low cost and has great potential to be applied in the clinical setting.’
Read More..


The details of the test appear in the journal Nature Biomedical Engineering.


How Does the Lab-on-a-chip Blood Test Detect Cancer?

The microfluidic chip device detects the presence of structures called exosomes produced by all cells and in more quantities especially by tumor cells which are actively dividing. These exosomes contain biological molecules that reflect the properties of the parent cells. Thus, an exosome produced and sent out by a tumor cell into the blood plasma will contain tumor antigens which can be detected by this biological test.

The new lab-on-a-chip's design is based on 3D nanopatterning technology that effectively mixes and detects biological proteins based on a herringbone pattern commonly occurring nature. By this mechanism, the exosomes present in the sample are pushed and come into contact with the chip's sensor much more efficiently in what is termed 'mass transfer.'


Principle of Mass Transfer Used in The Test

Zeng explains how the mass transfer works by comparing the nanopores in the device to tiny holes of a kitchen sink. If the sink is filled with water (plasma) and has numerous floating balls (i.e. exosomes), the mass transfer or means of getting the floating balls to come in contact with the bottom of the sink (chip sensor) is by draining the water from the sink. This is how the test works.

"People have developed smart ideas to improve mass transfer in microscale channels, but when particles are moving closer to the sensor surface, they're separated by a small gap of liquid that creates increasing hydrodynamic resistance," Zeng said. "Here, we developed a 3D nanoporous herringbone structure that can drain the liquid in that gap to bring the particles in hard contact with the surface where probes can recognize and capture them."

Using the nanopatterning technology other cancers (breast and colorectal) and neurodegenerative diseases can also be detected.

Novel 'lab-on-a-chip' technology helps to detect cancer present in very small amounts of plasma by a rapid, non-invasive cheap and simple blood test that will aid in early cancer diagnosis.

Early Detection of Lung Cancer may be Possible With New Blood Test
Blood test that analyzes free-floating DNA in the blood shows potential for early detection of lung cancer according to a new study that also finds that more than 54 percent of the somatic (non-inherited) mutations detected in blood samples were ...
READ MORE 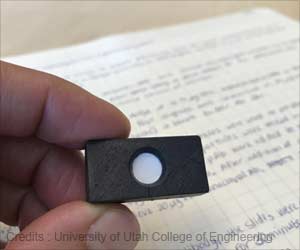 Early Stage Detection of Ovarian Cancer Through a Blood Test
A recent research on a bacterial toxin paved way for a new blood test that can diagnose ovarian cancer in early stages.
READ MORE