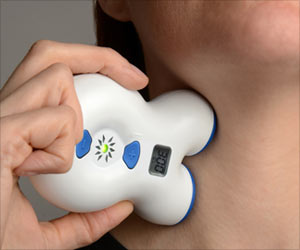 Acute bronchospasm is one of the life threatening morbidities of asthma. ElectroCore, an American company, has launched a self-administering device  GammaCore that uses the non-invasive vagus nerve stimulation (nVNS) technique to relieve the spasm. It is still yet to get FDA approval. Currently, most patients require immediate hospital admission and administration of inhalers and, sometimes intravenous drugs to stabilize the condition.

The GammaCore device is a small, hand-held device that should be applied on the skin of the neck over the vagus nerve for just two minutes.


At the recently concluded 67th American Academy of Neurology meeting in Washington DC, the company made a presentation to show that GammaCore does not cause any cardiovascular problems in patients with asthma. It reported on the cardiac effects of using GammaCore in asthma patients using nVNS to treat acute bronchospasm. It further reinforced the safety of using GammaCore through clinical trials and experience with more than 1500 patients.

The trial was conducted for a year at four centers across the US simultaneously  284 ECGs were performed on 29 patients with a history of mild-to-moderate asthma. Each patient had a 12-lead electrocardiograms performed at three study visits: baseline, stimulation, and follow-up. During the stimulation visit, ECGs were performed prior to, during, and ≤90 minutes after administration of a single 120-second nVNS stimulation.

The results showed no clinically significant changes in the ECG, either in isolated readings or in comparison to baseline. Treatment with nVNS had no effect on heart rate, PR interval, corrected QT interval, or QRS duration. These findings were reviewed by an independent cardiologist.

However, the doctors are still worried that the vagus nerve stimulation could cause problems with rhythms of the heart as the nerve not only supplies lungs but also the heart and abdominal organs.

Acute bronchospasm, caused by asthma, is also known as an asthma attack. Bronchospasm means your air passages have become narrow, which is caused by inflammation and tightening of the muscles in the air tubes (bronchi) in your lungs. This makes it hard for you to breathe or makes you to wheeze and cough.


Also known as asthma attacks, the treatment for bronchospasm is aimed at reducing inflammation and opening up the airways in your lungs. Bronchospasm is generally, treated with quick relief or rescue medicines (bronchodilators) and controller medicines (inhaled corticosteroids). These are, sometimes, given through an inhaler or a nebulizer. Doctors also prescribe systemic steroid medicine, which is either a pill you can swallow or is given through an IV tube. Antibiotic medicines are used only if there is a bacterial infection.

The most recent revised global estimate of asthma suggests that as many as 334 million people suffer from this respiratory disorder (Global Burden of Disease Study). The notion that asthma is the disease of high-income or developed countries is no longer true. Most people affected belong to the developing countries, and its prevalence is increasing fast.

On a global scale, the economic costs of asthma exceed those of Tuberculosis and HIV/AIDS combined.