Impact of a Weight-Loss Diet With Flaxseed on Men

Written by Sudha Bhat
Medically Reviewed by The Medindia Medical Review Team on March 18, 2015 at 4:31 PM 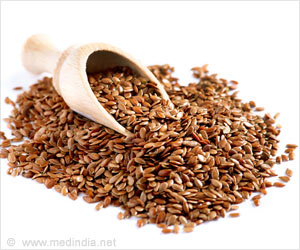 Studies have shown that flavonoids found in flaxseed help in lowering 'bad' cholesterol, also known as low density lipoprotein (LDL). Flaxseeds are good for weight loss too because of its high fiber content and are known to reduce blood sugar and may possibly prevent type 2 diabetes.

The past few years has seen emerging benefits of the 'wonder grain' that is flaxseed. The omega 3 fatty acids in flaxseed are proven to decrease pro-inflammatory compounds whereas the lignans (chemical compounds found in plants) have cancer protecting properties that are also known to prevent heart diseases.

Excessive weight gain or obesity is linked to alteration of some inflammatory markers leading to high blood levels of C-Reactive Protein (CRP) as well as Tumor Necrosis Factor-alpha (TNF-α) and reduced levels of adiponectin, which could be a contributing factor for many diseases including cardiovascular diseases.

Given the numerous health benefits of flaxseed, a clinical study was conducted by the University of São Paulo to evaluate if flaxseed added to a weight-loss diet has an effect on improving the nutritional and inflammatory markers. This study was published in Nutrition Journal.

In this study, the participants were all male between the ages 20 to 60 years, with few pre-existing cardiovascular risk factors. They were allocated into two groups (GriceLC group, GflaxLC group) with similar proportions of carbohydrate plus brown flaxseed or raw rice powder. The participants were followed-up for a total of 42 days. With regards to the blinding method, only the scientists, who did not have access to data, knew what each volunteer received, rice or flaxseed.

Biochemical assessments were done for the following at baseline and at the end of the intervention: total cholesterol and fractions (LDL-c and HDL-c), triglycerides, glucose, insulin, uric acid, as well as for evaluation of inflammatory markers (CRP, TNF-α), serum isoprostane and hormones (leptin and adiponectin). Serum and urinary enterodiol and enterolactione were also measured.

At the end of the study, it was seen that both groups GriceLC and GflaxLC, showed a reduction of approximately 56% of energy intake compared to baseline. Weight loss and systolic blood pressure reduction was reported in both groups. A decrease in inflammatory markers (CRP and TNF-α) was observed after flaxseed intake i.e., only in GflaxLC group (mean decrease of 25% and 46% respectively). Isoprostane levels were reportedly reduced in both groups. The levels of total cholesterol, LDL-c, uric acid and adiponectin reportedly improved in both the groups, however decrease in triglyceride levels occurred only in GflaxLC group.

The decrease in inflammatory markers such as CRP and TNF-α were seen only in the GflaxLC group, which was attributed to the anti-inflammatory and anti-atherogenic properties of lignans present in flaxseed. Increased levels of TNF-α and decreased levels of adiponectin were thought to contribute to long-term complications such as insulin resistance, endothelial dysfunction and atherosclerosis. In this study, both groups were found to have increased adiponectin blood levels indicating that protection from diseases could be reached by weight loss in patients with overweight and obesity.

The study reveals that weight loss diet  could be an important strategy to reduce inflammation markers such as CRP and TNF-α. The scientists pointed out that flaxseed may have contributed to this outcome. Additionally, reductions observed in blood pressure and central adiposity could also protect against cardiovascular diseases.

Advertisement
<< Helpline to Report Illegal Animal Testing for Cosmetics in I...
Smokers at Higher Risk of Recurrence of Prostate Cancer Even... >>

Health Benefits of Flaxseeds
Are you a fan of healthy foods? Consider the power-packed flaxseeds. Read on to find out the health ...

Study Highlights the Use of Flaxseed Supplementation in High Cholesterol Management
Use of dietary flaxseed supplementation has no effect on total cholesterol, low-density lipoprotein ...