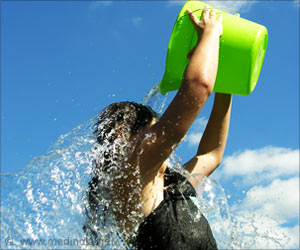 Unless you have been taking a social media break, you must have heard about the "Ice Bucket Challenge" introduced by the ALS Association. These are the videos people are posting where they dump ice water on their head to spread awareness about Amyotrophic Lateral Sclerosis (ALS), commonly called Lou Gehrig's disease. They also have to challenge three more people to do the same. If they don't want to accept the challenge, they can donate a larger amount of money. So you have two choices, donate a small amount and get ice water dumped on you or stay dry and donate $100 to ALS.


The fun element in the campaign has perhaps made it a big hit. The "failed" ones who dumped the ice water anywhere, but on their heads also posted the videos adding to the fun and incidentally drawing attention to ALS.

The campaign has been a huge success and the ALS association has reportedly collected $88.5 million till August 26. The raised fund will be used to find treatments and a cure for the disease.

Why is awareness important?

ALS is a rapidly progressive and fatal neurological disease characterized by the gradual degeneration of motor neurons or nerve cells in the brain, brain stem and spinal cord. These nerve cells control communication between the nervous system and the voluntary muscles in the entire body. The breakdown causes loss of muscle control which can lead to paralysis, failure of vital organs and eventually death. Global statistics of the disease show that it affects one in 10,000 people annually.

There are no known causes of ALS, and no known cure. Researchers have studied environmental factors, dietary deficiencies, and traumas, but to date, there is insufficient evidence to identify any one cause of ALS. Hence, more research is required if we are to find treatments and a cure for ALS.

The ALS association is providing assistance to persons with ALS. It is also conducting a research program focused on the discovery of treatments and eventually a cure for the disease. So, if you want to donate for the cause, log on to www.alsa.org.

A recent research has found that people who ate fruits and vegetables containing carotenoids, an oxidative compound which strengthens the immune system response, had reduced chance of developing ALS. According to them, carrots, watermelon and tomatoes contain this oxidative compound.

Inspired by the global charity chain to spread awareness about ALS, Hyderabad-based Manju Latha Kalanidhi has come up with the Indian version of the 'Ice Bucket Challenge'. For a different cause, though.

Dubbed the Rice Bucket Challenge, this challenge is totally different from the ice bucket. One needs to cook or buy a bucket of rice and feed it to someone needy. They then take a picture of themselves and post it on Facebook and nominate friends to take up the cause to feed the hungry.

"The idea of dunking oneself in icy cold water, shrieking in horror and then uploading the bizarre video felt preposterous. I wanted to just do something local, meaningful without wasting anything. So rice replaced water here," says 38-year old Manju.

The idea has hit all the right notes on social media. Its Facebook page was created a day ago and has already amassed more than 6,000 followers in less than 24 hours.

ALS Ice bucket Challenge has done its bit to prove yet again that social networking on the Net is a cool way to spread goodness and bring cheer.