Eye Examination Could Obviate The Need For MRI In Stroke Diagnosis

A new study suggests that gadolinium used during MRI imaging in stroke patients leaks into the eyes and can provide clues about the stroke. The study was published in Neurology.
Eye Examination Could Obviate The Need For MRI In Stroke Diagnosis


The study evaluated the MRI (magnetic resonance imaging) reports of 167 stroke patients. Some patients did not receive treatment before the test while others were treated with the clot-dissolving drug called tissue plasminogen activator. The MRI was first done without and then with a contrast dye called gadolinium which was injected into the blood. The use of a contrast allows the easy detection of the damaged area of the brain. The test was repeated 2 and 24 hours after the initial MRI. The scientists found that:
The leakage of gadolinium, however, could not be associated with the extent of the disability caused by the stroke.


‘Examination of the eyes with a special dye could give clues on the extent of brain damage caused due to stroke in the future.’


Gadolinium does not leak into the eyes of individuals without brain damage. The scientists therefore suggest that the stroke could make the blood vessels of the eyes leakier and therefore allows the leakage of gadolinium into the eyes.

Further studies on the phenomenon could reveal ways in which, using a special dye that accumulates in the eye in stroke patients similar to gadolinium, an eye examination will be able to provide clues into the severity of brain damage caused by the stroke.

Magnetic resonance imaging (MRI) is an imaging test during which images of the brain or other parts of the body are obtained using a magnetic field. A contrast is sometimes injected to highlight the damaged part. In a normal brain, leakage of the dye through the blood vessels into the brain does not occur. Damage to the brain on the other hand, allows the contrast to enter the brain and settle down in damaged areas, thus enabling easy detection of the damaged parts. 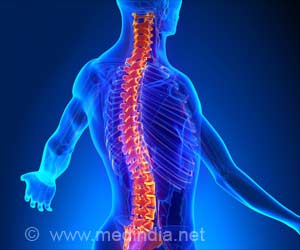