Apple-shaped distribution of body fat rather than pear-shaped distribution is associated with increased heart disease risk in postmenopausal women even if they are normal weight, according to a recent study led by Dr Qibin Qi, an associate professor at the Albert Einstein College of Medicine, New York,
Apple-shaped Body Puts Postmenopausal Women at Risk of Heart Disease

The findings of the study appear in the European Heart Journal.

Thus, body fat distribution can influence heart disease in postmenopausal women who may be normal weight.


‘Postmenopausal women who are apple-shaped, i.e. a higher proportion of fat is stored in the trunk rather than the thighs (pear-shaped) are at a greater risk of developing heart and blood vessel problems, even if they have a normal body mass index (BMI).’
Read More..


Dr Qi said: "Our findings suggest that postmenopausal women, despite having normal weight, could have varying risk of cardiovascular disease because of different fat distributions around either their middle or their legs. In addition to overall body weight control, people may also need to pay attention to their regional body fat, even those who have a healthy body weight and normal BMI". Dr Qui said: "Our findings highlight the need for using anthropometric measures that better reflect regional fat distribution to identify increased risk of cardiovascular disease. These are important research directions for future population studies."

The team plan to study the influence of dietary habits on fat distribution in these women, and evaluate whether food habits might alter multiple health risks including cancer, heart disease and premature death, by affecting body fat distribution.

Body Fat Calculator
This calculator estimates your percentage body fat, your body type and the amount of calories you have to burn to lose 1% of your body fat and it uses U.S Navy's Hodgdon-Beckett formula.
READ MORE 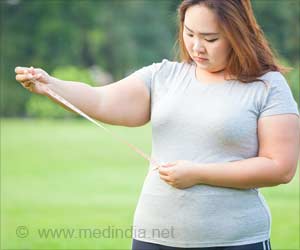 Heart Attack Risk Can Now Be Determined By Fat Distribution
It may not be the amount of fat in the body that matters but where it is stored that matters and it's link to heart attack risk, found a new study.
READ MORE

Our Genes Influence Fat Distribution in Our Bodies
The storage of fat around the trunk or other parts of the body is highly influenced by the genes, the effect which is largely seen in women than in men.
READ MORE