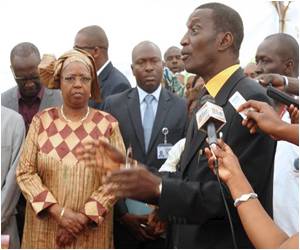 The president of Guinea said on Wednesday that though the death toll could rise above the current 74 because of sick patients remaining in hospital, the Ebola outbreak is under control.

"For the moment the situation is well in hand, and we touch wood that there won't be any new cases," President Alpha Conde told reporters during a visit to Geneva, home of the World Health Organization (WHO).

However he warned that with a number of people still in hospital suspected to be suffering from the deadly virus, the death toll may yet rise.


"There haven't been any new cases. But of those who remain in quarantine, there certainly will be some who will die," he said.

Working with the UN health agency and aid groups, Guinea remains on high alert against the virus, an incurable disease that can kill up to 90 percent of its victims.
Advertisement
On Tuesday, the health ministry said that 74 people had died so far this year in one of the worst ever outbreaks of the virus, with 121 confirmed cases. A larger number of people have been diagnosed with haemorrhagic fever, but not all those cases have been confirmed as Ebola.

No new cases have been recorded since Sunday, although four people are receiving treatment in the capital Conakry, and six in Gueckedou, in the south, which has seen one of the most serious outbreaks.

There is no vaccine or cure for Ebola, which can be caught from handling the blood or the bodily fluids of sick or dead forest animals.

Researchers in the United States have confirmed that the Guinea outbreak began after contact with bats caught for their meat in the country's southern forests, Conde noted.

It then spread in the hunters' communities and to health workers who initially failed to identify the risk posed by feverish patients.

To try and limit the outbreak, the government has advised Guineans to stop eating bats and avoid other "bush meat" when possible, and has also striven to apply infection-control measures by monitoring potential cases and those they have come into contact with.

The disease has spread to neighbouring Liberia, with suspected cases reported in Mali and Sierra Leone sparking fears it could spread throughout the region.

But in a sign of subsiding concerns, Senegal, which had closed its border with Guinea, reopened the frontier on Tuesday, Conde said.

The WHO has described the outbreak as one of the most challenging since the virus emerged in 1976 in what is now the Democratic Republic of Congo.

There is no vaccine or cure for the virus, which can easily spread among humans through contact with infected blood, bodily fluids and tissue.

Its spread can be stopped only by isolating suspected cases in ultra-clean conditions and quarantining those who have been in contact with them.

Ebola Virus Death Toll: 74 People Diagnosed With Ebola Fever Die in Guinea
In one of the worst ever outbreaks of the Ebola virus, Guinea confirmed on Tuesday 74 people ......

Ivory Coast Cuisine Changed Due to West Africa's Ebola Outbreak
The outbreak of Ebola fever in West Africa came as bad news for gourmets in Ivory Coast, as it ......

Ebola Has Killed 61 in Guinea Since January: Report
The government said the Ebola virus has claimed 61 lives in Guinea out of 109 laboratory-confirmed ....