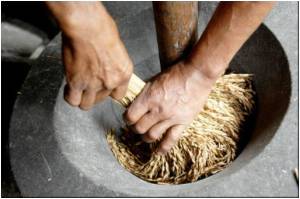 A group of villagers from Bihar's Madhubani Project got together and generated electricity with the help of paddy husk. The initiative under the name ' Husk Power System' has 6 plants and lighting over 10,000 homes.

Suresh Prasad Gupta, an official of the Husk Power Plant, said their initiative does not have a profit motive behind it.

Scientists at the University of Utah have developed a new concept in water treatment.
Advertisement

"This machinery is a part of a husk power plant. We generate energy from rice husk. And we give the supply to the whole village. With the help of rice husk we give a supply of full six hours of power in the rural areas where there is no electricity," he said.


Muyutyanjya Pandey, former village head, said the power plant has proved to be a blessing for the children in the village, who are no more dependent on daylight for their studies.

Green Super Rice, bred to preform well in case of toughest conditions like drought and low inputs, is a step away from reaching farmers.
Advertisement
"With the help of this, children of our village are able to study. With better resources, everyone is able to study and the electricity is available for six continuous hours from 6 in the evening till 12 in night," said Pandey.

The village till date does not form part of electrification projects undertaken by the government in the region.

The village initiative, which is three year old, operated its first plant in August 2007.

A group of surgeons in Taiwan have been studying the effects of electricity on penises by conducting the experiments on themselves.
Advertisement
<< New Medical Gadget That Will Predict Ovulation Dates
Center for Paramedics to be Opened in Punjab >>