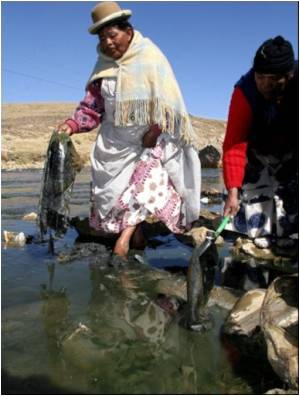 Scientists at the University of Utah have developed a new concept in water treatment.

The researchers have made an electrobiochemical reactor in which a low electrical voltage is applied to microbes to help them quickly and efficiently remove pollutants from mining, industrial and agricultural wastewater.

Researchers have realized that the process of nitrogen control may not be the answer to controlling the problem of cultural eutrophication,
Advertisement

The patented electrobiochemical reactor (EBR) process replaces tons of chemicals with a small amount of electricity that feed microbes with electrons.


Tests have shown that the electrons accelerate how quickly the microbes remove pollutants such as arsenic, selenium, mercury and other materials, significantly reducing the cost of wastewater cleanup.

A University of Missouri researcher has found that silver nanoparticles may be destroying beneficial bacteria .
Advertisement
Metallurgical engineer Jack Adams of the College of Mines and Earth Sciences said the new method could enhance just about any type of wastewater treatment.

It now is being tested primarily for removing metals from mining wastewater, but also could be used for other industrial and agricultural wastes, he added.

In conventional wastewater treatment, microbes or chemicals alter or remove contaminants by adding or removing electrons. The electrons come from large excesses of nutrients and chemicals added to the systems to adjust the reactor chemistry for microbial growth and contaminant removal.

Those large excesses must be added to compensate for changes in water chemistry and other factors that limit the availability of electrons to remove pollutants.

The electrobiochemical reactor or EBR system overcomes these shortcomings by directly supplying excess electrons to the reactor and microbes using low voltage and no current, unlike other systems that provide large electrical currents.

One volt supplies about one trillion trillion electrons (note: trillion twice is correct). These electrons replace the electrons normally supplied by excess nutrients and chemicals, at a considerable savings and with greater efficiency.

A sanitation project that would work with nature to neutralize human wastes are pioneered by inmates at a prison on the East coast of Africa .
Advertisement
<< UK Government to Levy a 'Fee' For Family Breakdown
In New Zealand, Young Girls Ahead in the Binge Drinking Rac... >>

Drug - Food Interactions The Essence of Yoga Calculate Ideal Weight for Infants Pregnancy Confirmation Calculator Iron Intake Calculator Find a Doctor Sanatogen Nutam (400mg) (Piracetam) Turmeric Powder - Health Benefits, Uses & Side Effects Selfie Addiction Calculator
This site uses cookies to deliver our services.By using our site, you acknowledge that you have read and understand our Cookie Policy, Privacy Policy, and our Terms of Use  Ok, Got it. Close
×