In New Zealand, Young Girls Ahead in the Binge Drinking Race 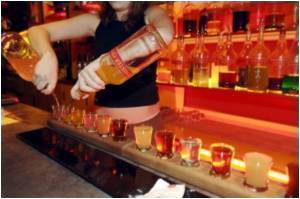 More and more girls are joining the binge-drinking culture and ending up in hospital in New Zealand, it has been revealed.

A pilot programme in Wellington by the Ministry of Health has provided a better picture of the impact of the country's drinking culture.

The new programme comes as Auckland City Hospital says it's concerned by a 30 percent increase in the past five years in the number of young people going to its emergency department because of drink-related problems.


Chief medical officer Margaret Wilsher said although the numbers fluctuate each year the trend shows an overall increase in the number of young people seeking treatment.

An expert, who is also an adviser to Prime Minister David Cameron, feels that people should stop buying last rounds of drinks to avoid binge drinking.
Advertisement
In 2006 there were 127 alcohol-related presentations in the 20-24 age group and last year that number had climbed to 201.

"The overall trend is that alcohol-related presentations are greater in young adults than in older or middle-aged adults," Stuff.co.nz quoted Wilsher, as saying.

He said that boozed young people were a small percentage of patients in emergency rooms.

"But they do take a disproportionate amount of time, one or two heavily intoxicated people who arrive and need supervision can have a major effect on the whole place," he added.

"Female drinking to excess has gone up a long way and that's created quite a concern.

"You've got all the vulnerability issues, like unplanned sex, and therefore unplanned pregnancies and STD rates are climbing around the country.

"Young women are very vulnerable when they're intoxicated - and men are bastards," said Quigley.

Binge drinking, long known as a cause of liver damage, is also linked to heart disease.
Advertisement
<< Low Amounts of Electricity to be Used in New Wastewater Tre...
Get the Electric Car That Beats Traffic Jams and Parks Itse... >>