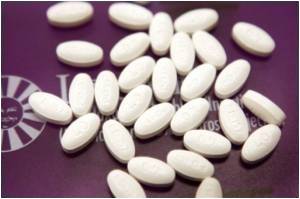 The structure of human HDL cholesterol has been determined by University of Cincinnati (UC) researchers who say the finding could help explain how this "fat packet" protects against cardiovascular diseases, including heart attack and stroke.

HDL (high-density lipoproteins) also known as "good cholesterol," are packets of protein and fat that deliver fat to specific locations within the body.


There is an increasing effort to create drugs that help to raise levels of HDL working in conjunction with existing drugs that lower "bad cholesterol," or low-density lipoproteins (LDL).

Cholesterol is produced by the body (liver) and is essential for normal body functioning.
Advertisement
Studies of synthetically derived HDL have shown that an abundant protein in HDL, apolipoprotein A-I, plays a key role in HDL's cardioprotective anti-inflammatory and anti-oxidative properties.

"Unfortunately, we've known very little about the molecular details that explain HDL's protective effects," says Davidson. "A major reason for this is an almost complete lack of understanding of HDL's structure and how it interacts with other important plasma factors."

Rong Huang, PhD, a post-doctoral fellow in Davidson's laboratory, has isolated human HDL and analyzed its 3-D structure as it circulates in human plasma.

"Previous studies have only focused on synthetic HDL made in the test tube," Davidson says. "By isolating human HDL, we were able to focus on the broad range of HDL particles actually circulating in humans."

Team members used a series of sophisticated spectroscopic and mass spectrometric techniques to study HDL and have found that proteins of HDL form a cage-like structure that encapsulates its fatty cargo.

They determined that most of the HDL particles circulating in human plasma are remarkably similar in structure; however, they found evidence that the particles have a twisting or shock absorber-like motion that allows them to adapt to changes in particle fat content.

By determining the structure of HDL, Davidson and his team were able to conclude that the majority of physiological interactions occurring with HDLincluding its twisting movementsoccur at the particle surface, which is dominated by the cardioprotective protein apolipoprotein A-I.

This monopolization of the particle surface, Davidson says, suggests that other proteins have very little room to bind to HDL and probably have to interact with the protein itself, which could explain how apolipoprotein A-I plays such a dominant role in HDL function and its protective effects.

"This work presents the first detailed models of human plasma HDL and has important implications for understanding key interactions in plasma that modulate its protective functions in the context of cardiovascular disease," says Davidson.