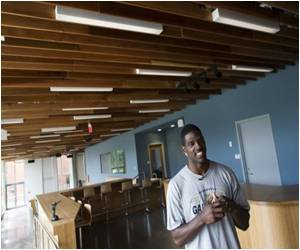 With a funny anecdote, college football player Tony Tatum recently sparked a rousing round of applause. The only thing is, you couldn't hear much clapping. But you could see it.

Those listening to the charismatic student emphatically waved their hands in the air in a sign of appreciation -- because Tatum and his audience were communicating via sign language.

Headphones Can Cause Temporary Deafness: Study

Turning the volume up too high on your headphones can damage the coating of nerve cells, leading to temporary deafness; scientists from the University of Leicester have shown for the first time.
Advertisement

Tatum is hard of hearing and attends Gallaudet University, an institution of higher learning that offers programs specifically for the deaf.


Located on a lush green campus in the US capital, the school whose charter was signed by then president Abraham Lincoln in 1864 has developed into a hotbed of architectural design geared toward a community that predominantly interacts through the motioned -- not the spoken -- word.

According to a recent study, people who are born deaf process the sense of touch differently than people who are born with normal hearing.
Advertisement
The latest example is Tatum's dormitory, an $18.5 million state-of-the art building with 175 beds.

"It's very deaf-friendly," said Tatum, who sports prominent gold earrings in addition to a hearing aid. "You can see everything and that's what I like about it."

What makes the Living and Learning Residence Hall 6 innovative is that it is built according to a set of design principles dubbed DeafSpace.

"DeafSpace, in short, is a term that's been coined here at the university to refer to a way of building buildings, designing buildings, and also just a way of thinking about creating an environment that's conducive to, and really in tune with, deaf sensibilities," said Hansel Bauman, Gallaudet's director of campus design and planning.

A tour of the five-floor building -- which has a friendly, modern and airy feel -- reveals how this notion is more than mere theory and extends well beyond visual alerts for fire alarms and doorbells.

The most striking of the construction's myriad of characteristics is an abundance of light that seeps in through wide windows or emanates from an array of lamps in a way to avoid glare.

Large open spaces and even moveable walls on wheels, meanwhile, allow the formation of conversation circles that enable everyone in a group of deaf and hard of hearing people to visually take part in a dialogue.

Then there are the wider hallways and sidewalks to accommodate signers as they stroll side by side while maintaining enough space between themselves to gauge facial expressions.

Not to be forgotten are the sensor-operated front doors and ramps that promote continued interaction often stymied -- and even rendered dangerous -- by steps or stairs.

What also strikes visitors is that some walls are painted a special shade of blue -- a color that serves as an agreeable backdrop for people whose eyes perform a key information-gathering role and can become strained, according to Bauman.

"The color of the wall almost is the page that the visual word is written against," he said, adding that blue, a cooler tone, contrasts with the warmer tones of skin and provides "crispness".

"All day, people are reading sign language and you're also managing space visually -- so that tends to create eye fatigue," he said.

While it may seem counterintuitive at first, acoustics play an important role among the deaf and hard of hearing.

That's because many wear cochlear implants or assistive hearing devices that turn reverberation found in tall spaces, for instance, into a type of echo.

"That echo becomes noise rather than a signal, it clouds the spoken word or the specific sound you want to hear," Bauman explained, motioning to dark insulation panels on the ceiling meant to minimize the phenomenon.

Sometimes, it's the little things that have the most impact.

Tatum for one, pointed out that the light switch for the bathroom he shares with his suite mates is positioned in the communal space -- replacing a bang on a closed door when duty calls with the flicking of the switch.

David Lewis, partner at LTL Architects who was picked for the project and whose team spent "thousands" of hours on it until completion, wants the residence to become a research tool.

"I very much hope that this building can not only become a home and a site for living and learning but also a real testing ground, a place to learn from," he said.

"Architecture has come a long way in terms of universal design, and only recently has DeafSpace design been considered," he said. "This consideration is long overdue."

Researchers have long sought to fin out how deafening affects the vocal nerve cells.
Advertisement
<< Coming Closer to Reality Is An Eye-controlled TV
10 Million Tourists To Be Received By Tibet This Year >>