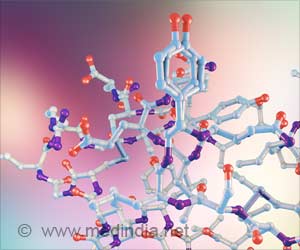 Transparent transistors fabricated onto the sharp curves of a tiny glass tube could pave the way toward a therapeutic advance for the nearly 10 percent of the U.S. population who have diabetes, said Oregon State University researchers.

The work by Greg Herman and Xiaosong Du of the College of Engineering also represents a step toward better medical diagnostic techniques: fully transparent electronics that open the door to combined sensing and imaging technologies. Earlier Herman and Du had fabricated amperometric glucose sensors onto a flat polymer film that was then wrapped around a catheter tube. When tested in an animal model, however, the early devices tended to delaminate - the sensors would come apart from the film, or the film would peel off from the catheter.

Advertisement
‘New finding is a key step toward an artificial pancreas: a catheter that can detect blood sugar levels and transmit the info to a wearable, computerized insulin pump.’

Researchers addressed that problem by microcontact printing a-IGZO-FET-based sensors - amorphous indium gallium zinc oxide field effect transistor - directly onto glass tubes with a 1-millimeter radius. Traditional patterning technologies like photolithography and e-beam lithography have proved troublesome for highly curved surfaces, but microcontact printing worked well. "It takes advantage of an elastomeric stamp's ability to conform to curved substrates with minimal distortion of the printed pattern," Herman said. "The adhesion of the film deposition is very good. For it to come off, you'd essentially have to take a file to it. It's much more rugged than what we had before, and the electronic performance is excellent - it's the same as when fabricated on a flat surface using non-printing methods. We used a glass tube in part to show off the device's transparency."


Catheters are metallic or plastic, so unlike a sensor-equipped contact lens Herman has also worked on, transparency isn't necessarily required. "But the idea is with a catheter, you could start integrating optical fibers that have the a-IGZO-FET sensors on them," he said. "Some types of sensing need an optical response for detection, so if we can integrate an optical response with an electronic signal, we can expand the detection being done. Field effect sensing may increase the functionality and sensing range of optical sensing systems." Also, transparent field effect sensing can be melded with electrophysical and neural imaging devices and could greatly improve the sensitivity of an endoscope - a device inserted into the body to provide an internal view.
Advertisement
The artificial pancreas aspect of the research is particularly significant to those with Type 1 diabetes, also known as juvenile diabetes. Most of those patients - there are about 3 million in the U.S., with 30,000 new cases diagnosed each year - are already wearing an insulin pump, so adding glucose sensing to the catheter would simplify their lives. Type 2 diabetics typically self-inject, so they would be better candidates for the sensor-equipped contact lens.