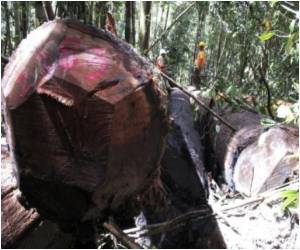 He walks through the hundred-year-old community, whose roots are deeply intertwined with that of the sapodilla tree, whose chicle resin was once widely used in chewing gum.

But the people of Carmelita now have a new livelihood: protecting the largest nature reserve in Mesoamerica.


Nestled deep within the Maya Biosphere Reserve, the community -- settled by Mexican and Guatemalan laborers -- works to preserve the area in the country's vast northern Peten department.

Love spicy food? You may be more outgoing and risk-taking than others around you, a new study suggests.
Advertisement
For nearly 25 years -- following a chicle collapse in the 1980s from a decline in international demand -- Carmelita has been part of a government program of forest concessions, under which its residents care for and live off the land.

In the thick jungle, a leafy tree with ancient vertical and diagonal scars is a reminder of the "glory days" of chicle, when workers hashed zigzagging trails in the trunks so that the resin could run down.

But today inhabitants are organized in a cooperative, harvesting wood, xate (an ornamental plant for flower arrangements), pepper, chicle and other forest resources, Trujillo said.

'Carmelita lives off the forest' -

Carmelita residents -- the 380 families charged with caring for and harvesting 53,797 hectares (132,935 acres) -- use oft-repeated slogans such as "Carmelita lives off the forest," and "the forest pays us in health and education."

According to the National Council of Protected Areas (CONAP), forest concessions in the Mayan jungle, including that of Carmelita, each year generate an estimated $6 million and create 3,300 jobs.

Wood and xate, especially popular in the United States and Europe, are the main sources of money.

And an international guitar maker even requests "special cuts" of wood to make instruments, Byron Hernandez, one of the community's foresters, told AFP.

The money is allocated to scholarships, medical services and investments, such as a sawmill for making furniture. In recent years, it has also gone towards promotion of tourism, particularly to the region's archeological sites.

Forest concessions "were not created to form multimillionaire communities because the resources are not exploited industrially, save in a conservation capacity," said Carlos Kurzel, a member of an organization that brings together communities with such licenses.

Kurzel emphasized that the communities only cut trees that meet certain criteria and leave seed trees to regenerate harvested regions.

Despite the success of sustainable forest management, he said there were several threats such as illegal ranching in which trees are cut down to create grassland for livestock, land grabs by unauthorized settlements, and in some cases, drug trafficking.

Uaxactun, another community within the reserve that also originated as a chicle camp, has been responsible for 83,558 hectares of forest since 2000.

In a large room, men and women tend to xate branches, which were collected in the forest by "xateros" and raised at the local nursery.

"Being an xatero is a tradition," said Ervin Maas, who came to the community with his parents 20 years ago.

A special report on World Water Day, 2008. This year has been declared as the International year of Sanitation.
Advertisement
Advertisement