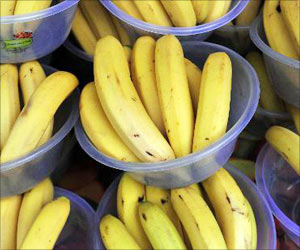 Food safety officers attached to the food and drugs administration (FDA) seized about 800kg of artificially ripened bananas from a shop at Mapusa market, Goa, continuing its crackdown against unhygienic food products.

The seize was carried out with the help of Mapusa Municipal Council staff and destroyed them at the Mapusa waste treatment site later in the evening.

Rajaram Patil, Food Safety Officer said that they are raiding all food stores at weekly bazaars across the state to crack the whip on the sale of unhygienic food products. "When the samples were tested in the FDA laboratory, the presence of ethephone, a chemical used to ripen the bananas, was detected. Later in the shop, we have found half-a-bottle of the chemical which has also been seized," Patil said.


At Mapusa, they raided various food stalls at the Friday bazaar and found a stall owned by Hanif Shaikh. Suspecting that the bananas being sold at the stall were artificially ripened, the FDA sought samples.

Her Secret to Slim and Fit Body: 51 Bananas a Day
This woman from Australia claims she can eat 51 bananas in a day and as part of her raw vegan diet ....

Bananas and Painkillers for the World's Oldest Man
A new banana-flavored pain reliever is now been considered by a US drug company...

Bananas: Cure for Migraine
Lisa Poyner a mother of two from West Sussex has found that munching on a banana every couple of ......

BRAT Diet (Bland Diet)
A BRAT diet is usually recommended for a person to recover from nausea, vomiting and an upset stomac...