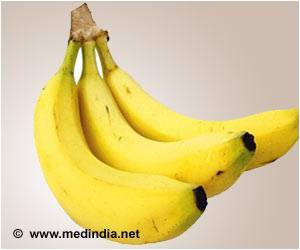 The government in Costa Rica, one of the biggest suppliers of the fruit, has declared a "national emergency" over the state of its crop after its half-a-billion-dollar banana export industry has been hit by two separate plagues of mealybugs and scale insects, the Independent reported.

According to Magda Gonzalez, the director of the agriculture ministry's State Phytosanitary Services (SFE), climate change had boosted insect populations in recent years, making plagues increasingly likely across the world.


Gonzale told The Tico Times that the insects weaken plants and cause blemishes on fruit, leading to vast batches being rejected.

Top 10 Health Benefits of Banana
Bananas are one of the most consumed fruits in the world. They offer a wide array of health ......

Bananas and Painkillers for the World's Oldest Man
A new banana-flavored pain reliever is now been considered by a US drug company...

Bananas: Cure for Migraine
Lisa Poyner a mother of two from West Sussex has found that munching on a banana every couple of ......

Hydrogel Extends Shelf-life of Bananas
Scientists have developed a hydrogel that can actually extend the shelf life of bananas....

BRAT Diet (Bland Diet)
A BRAT diet is usually recommended for a person to recover from nausea, vomiting and an upset stomac...

Health Benefits of Banana Flower
Bananas are among the most popular of fruits across the world. Also, find out about the health benef...

Medicinal Properties of the Banana Plant
Bananas are a tropical, starch-rich and affordable, wholesome fruit, pre-packed hygienically by natu...