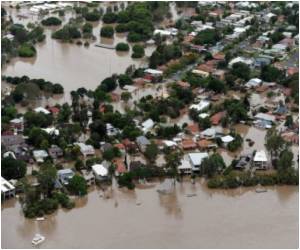 Destructive flooding in Queensland and Victoria may prove to be the costliest and largest natural disaster ever hit Australia, said Deputy Australian Prime Minister Wayne Swan.

Raging floodwaters have swamped thousands of homes and businesses in Queensland, leaving at least 25 people dead and over 100 missing since late November.

Australia On High Alert For Disease Outbreak After Floods

A total of 46 towns have already been hit in Victoria, affecting over 3,000 people and 1,600 properties.


The floods have been blamed on the La Nina weather pattern in the Pacific.

"It looks like this is possibly going to be, in economic terms, the largest natural disaster in our history," the Courier Mail quoted Swan, as saying.

Waterborne diseases are communicable diseases caused by diseases causing microorganisms in contaminated water. It is more prevalent during floods and in tsunami affected areas.
Advertisement
"It will involve billions of dollars of commonwealth money, and also state government money, and there's going to be impacts on local government as well."

"This is very big ... It's not just something which is going to occupy our time for the next few months. It will be a question of years as we go through the rebuilding process," he added.

Swan further said that the disaster would affect living costs across Australia.

"There's no doubt there will be some impact, yes, in the cost of living. The Lockyer Valley is a food bowl which not just supplies Queensland, but the rest of the country," the Deputy Prime Minister said.

"There will be all sorts of impacts, but it's far too early to be putting figures on those," he added.

After Earthquake and Cholera-Oubreak, Haiti Braces for Hurricane and Floods

Color Blindness Calculator Pregnancy Confirmation Calculator Iron Intake Calculator Loram (2 mg) (Lorazepam) Find a Doctor Find a Hospital Blood - Sugar Chart Sinopril (2mg) (Lacidipine) Nutam (400mg) (Piracetam) The Essence of Yoga
This site uses cookies to deliver our services. By using our site, you acknowledge that you have read and understand our Cookie Policy, Privacy Policy, and our Terms of Use