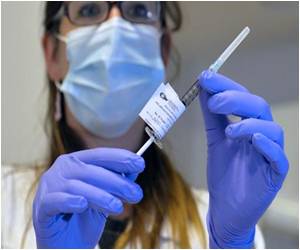 An experimental Ebola vaccine has been found safe by an early-stage human trial, and it also elicited robust antibody responses in all 40 of the healthy adults who received it. A report describing preliminary results of the study that tested the candidate vaccine called VSV-ZEBOV appeared online in The New England Journal of Medicine.

"The prompt, dose-dependent production of high levels of antibodies following a single injection and the overall favorable safety profile of this vaccine make VSV-ZEBOV a promising candidate that might be particularly useful in outbreak interventions," said Richard Davey, one of the lead investigators from National Institute of Allergy and Infectious Diseases (NIAID) in the US.

A team of international scientists called for new Ebola vaccines to be made available in months rather than years and warned against complacency after a reduction in infection rates.
Advertisement

The volunteers tolerated the vaccine well, the most common side effects were injection site pain and transient fever that appeared and resolved within 12 to 36 hours after vaccination. Scientists at the Public Health Agency of Canada developed the candidate vaccine.


It was licensed to NewLink Genetics Corp. of Ames, Iowa, a company collaborating with Merck & Co. Inc., of Kenilworth, New Jersey in the US. The experimental vaccine is based on a genetically modified and attenuated vesicular stomatitis virus (VSV), a virus that mainly affects cattle.

A new Ebola vaccine, developed by the Beijing Institute of Biotechnology and the Tianjin CanSino Biotechnology, has been found to be safe in the first phase one trial.
Advertisement
In the investigational vaccine, a gene for a VSV protein was replaced with a gene segment from a key protein in the Zaire species of Ebola virus.

The vaccine does not contain the whole Ebola virus and therefore cannot infect vaccinated persons with Ebola. The new report summarises results of the first 52 volunteers enrolled in the study: 26 at the National Institute of Health Clinical Center in Bethesda, Maryland, and 26 at the WRAIR clinic in Silver Spring, Maryland.

Six volunteers at each site received a placebo injection of saline solution, and the remaining 40 received the experimental vaccine. Earlier, a study in The Lancet reported that another experimental Ebola vaccine developed by the Beijing Institute of Biotechnology and the Tianjin CanSino Biotechnology in China provoked immune response in recipients.

The first large-scale trial of an Ebola vaccine will begin in Guinea at the weekend, said the World Health Organization, weeks after a similar test kicked off in neighbouring Liberia.
Advertisement
Advertisement

Ebola is caused by a virus via direct contact with body fluids or infected blood. Scientists have identified ...