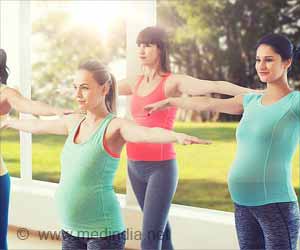 Obese mothers can protect themselves and their kids from adverse health effects by taking up exercise during pregnancy, reports a new study. The findings of the study are published in the journal Physiological Reports.

Exercise immediately prior to and during pregnancy restores key tissues in the body, making them better able to manage blood sugar levels and lowering the risk of long term health problems, suggests new research carried out in mice.

Advertisement
‘Exercise during pregnancy protects obese mothers-to-be from gestational diabetes and their kids from health problems in later life by restoring key tissues in the body. ’
Read More..

Researchers at the University of Cambridge, who led the study, say the findings reinforce the importance of an active lifestyle when planning pregnancy.


In the UK, more than half of all women of reproductive age and almost a third of pregnant women are overweight or obese. This is particularly concerning, as being overweight or obese during pregnancy increases the risk of complications in the mother, such as gestational diabetes, and predisposes both her and her infant to develop metabolic diseases such as type 2 diabetes in the years after pregnancy.
Advertisement
Exercise is known to improve how the body manages blood sugar levels and thereby reduce the risk of type-2 diabetes and metabolic syndrome in non-pregnant women. It also has positive effects prior to and during pregnancy, with beneficial outcomes for both mother and her child, preventing excessive gestational weight gain and the development of gestational diabetes, and the need for insulin use in women who have already developed gestational diabetes. However, little is known about the changes that exercise causes to the tissues of obese pregnant mother.

To answer these questions, researchers at the University of Cambridge fed mice a sugary, high-fat diet such that they become obese, and then the obese mice were exercised. The mice exercised on a treadmill for 20 minutes a day for at least a week before their pregnancy and then for 12.5 minutes a day until day 17 of the pregnancy (pregnancy lasts for around 20 days in mice).

Mice are a useful model for studying human disease as their biology and physiology have a number of important characteristics in common with those of humans, including showing metabolic changes with obesity/obesity-causing diets and in the female body during pregnancy. The researchers found that the beneficial effects on metabolic health in obese mothers related to changes in how molecules and cells communicate in maternal tissues during pregnancy.

"A moderate level of exercise immediately before and then during pregnancy leads to important changes in different tissues of the obese mother, effectively making the tissues more like those seen in non-obese mothers," says Dr Amanda Sferruzzi-Perri, a Royal Society Dorothy Hodgkin Research Fellow from the Centre for Trophoblast Research in the Department of Physiology, Development and Neuroscience at the University of Cambridge, who co-led the study.

"We believe these changes may explain how exercise improves the metabolism of the obese mother during pregnancy and, in turn, may prevent her babies from developing early signs of type 2 diabetes after birth."

The key organs of the mother that were affected by exercise were:

Exercise affected key signalling pathways - the ways that molecules and cells within tissue communicate - involved in responding to insulin (the hormone that stimulates glucose uptake by white adipose tissue and skeletal muscle), in storage and breakdown of lipids (fats found in the blood and tissue) and in growth and the synthesis of proteins.

White adipose tissue showed the greatest number of changes in response to exercise in the obese pregnant mouse, being restored to a state similar to that seen in the tissue of non-obese mothers. This suggests that insulin resistance of the mother's white adipose tissue may be the cause of poor glucose-insulin handling in obese pregnancies. The findings are different from that seen in non-pregnant animals, whereby exercise typically affects insulin signaling in the skeletal muscle.

In addition, the team's previous work showed that exercise improves sensitivity to insulin and glucose handling throughout the whole body in the obese mother. It also prevents the development of insulin resistance in the offspring of obese mothers after birth. Low insulin sensitivity/insulin resistance requires larger amounts of insulin to control blood glucose levels.

"Our findings reinforce the importance of having an active lifestyle and eating a healthy balanced diet when planning pregnancy and throughout for both the mother and her developing child," says co-lead Professor Susan Ozanne from the Wellcome Trust-Medical Research Council Institute of Metabolic Science at the University of Cambridge.

More News on:
Trimester of pregnancy Pregnancy and Exercise Home Pregnancy Test Pregnancy Psychological Changes In Pregnancy Drugs in Pregnancy and Lactation Breech Presentation and Delivery Air travel: To fly or not to fly Diet Lifestyle and Heart Disease Tips to Live Longer

Top 10 Benefits of Exercise During Pregnancy
Pregnancy is a period marked with anxieties, worries and unanswered questions. Exercising during ......