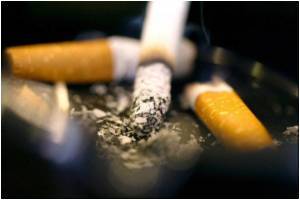 Europe's health commissioner said on Thursday he is working on proposals to tighten bloc-wide advertising and marketing constraints on tobacco products.


He was speaking ahead of World No Tobacco Day on Monday, at the presentation of survey results that showed 650,000 of the EU's 500 million population die prematurely because of tobacco use each year.


Britain, Cyprus and Ireland are the only three member states to have completely banned smoking in public places, and Dalli cited a 17 percent reduction in heart disease rates in Scotland as proof of the benefits.

Edinburgh introduced its ban in 2006, following Ireland's lead, and today's nationalist Scottish government is set to extend anti-smoking legislation there and ban the display of tobacco products in shops.

Throughout the EU, another nine counties -- Finland, France, Italy, Latvia, Lithuania, Malta, the Netherlands and Slovenia and Sweden -- have a patchwork of laws allowing for 'smoking zone' exemptions.

But in the rest of the bloc, such as Belgium or Germany, cafés and bars can normally choose to accept smokers depending on their size or whether food is being served, for example.

Dalli took a lung-test organised by the European Commission for passers-by, telling AFP he passed "without any problem because I gave up smoking 10 years ago."

Three-quarters of people surveyed by the EU said they backed strict anti-smoking measures, although the commissioner said the fact that 38 percent of those questioned said they smoke remained a concern.