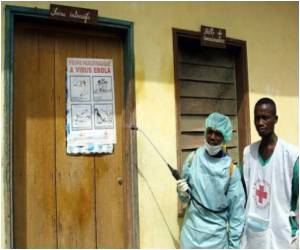 Pentagon-backed research has yielded a breakthrough in the fight against the Ebola virus, a pathogen that is also feared as a future bioterror weapon, scientists reported on Friday.

Monkeys injected with the deadliest strain of Ebola survived after receiving an experimental formula that uses tiny particles of genetic material to disrupt viral reproduction, they said.

According to a study a minor reduction in levels of a gene called CD45 may provide protection against the virus that causes Ebola hemorrhagic fever and the bacterium that causes anthrax.
Advertisement

It is the first time a drug has protected non-human primates against Ebola, a virus that is sometimes dubbed a "slate wiper" for its ruthless culling of lives.


Ebola is one of a family of so-called filoviruses, which cause haemorrhagic fever, a rare but highly lethal disease in which the patient can bleed to death, sometimes from the mouth, ears and eyes.

Scientists have identified two biochemical pathways-PI3 kinase pathway and the CAMK2 pathway-that are vital for Ebola virus infection.
Advertisement
Five Ebola strains have been identified since the first case came to light at the Ebola River in Zaire, now the Democratic Republic of Congo, in 1976.

The deadliest is the Zaire strain, known to virologists by the acronym of ZEBOV (Zaire Ebola virus), which inflicts a death rate of 80 to 90 percent.

A team led by Thomas Geisbert of the National Emerging Infectious Diseases Laboratories Institute at Boston University School of Medicine tested the formula on two groups of rhesus macaque monkeys after getting promising results on guinea pigs.

The drug contains so-called small interfering RNAs, or siRNAs, designed to act as tiny wrenches that are thrown into the machinery of enzymes which enable the virus to replicate.

In the first experiment, three monkeys were given a potentially mortal dose of ZEBOV and then innoculated with four doses of the drug on successive days. One of the animals died.

In the second group, four monkeys were given seven successive doses. All survived.

In both experiments, a "control" monkey that was not innoculated died from the virus.

Geisbert said the results marked a major step forward, although he cautioned that a long road lay ahead in further safety tests before the treatment could be licensed for humans.

"We believe this work justifies the immediate development of this treatment as an agent to treat EBOV-infected patients, either in outbreaks or accidental laboratory exposures," he said.

The work was funded by the Defense Threat Reduction Agency, a branch of the Pentagon that works on strategies against weapons of mass destruction.

The virus has a natural reservoir in several species of African fruit bat. Gorillas and other non-human primates are also susceptible to the disease.

The study is published by The Lancet.

Scientist Arrested for Smuggling Vials Used in Ebola Research into US

The Philippine government will slaughter 6,000 pigs on a farm near Manila where the Ebola-Reston virus has been found in the animals and its antibodies in humans, health officials said Friday.
Advertisement
News A-Z
A B C D E F G H I J K L M N O P Q R S T U V W X Y Z
What's New on Medindia

Find a Doctor Drug Interaction Checker Post-Nasal Drip Blood Pressure Calculator Daily Calorie Requirements Indian Medical Journals How to Reduce School Bag Weight - Simple Tips The Essence of Yoga Drug Side Effects Calculator Vent Forte (Theophylline)
This site uses cookies to deliver our services. By using our site, you acknowledge that you have read and understand our Cookie Policy, Privacy Policy, and our Terms of Use