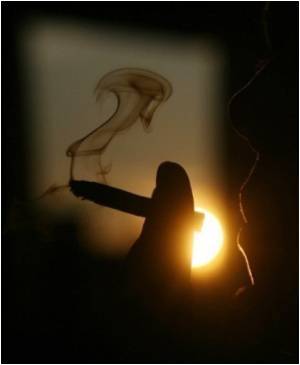 An eight-year-old Indonesian boy who is addicted to smoking for the last four years is to undergo therapy to kick his habit, a child welfare official said.

"You can see a dramatic change of behaviour when he doesn't have a cigarette for a while. He becomes emotionally aggressive and uncontrollable. He acts like he's possessed by evil spirits," Sirait told AFP.


The boy's father Agan Umar said his son would become enraged and "smash glass windows or whatever's around" if he is not constantly given cigarettes.

Tired of people asking you to stop smoking around them? Don't want to be ordered around by public smoking bans? Simple steps that help you to quit smoking.
Advertisement
"I hope the therapy works so my son can go back to school and live a normal life like the other kids," Umar said.

The boy will leave his village in Sukabumi in western Java on Monday to start receiving intensive specialist care in the capital Jakarta, Sirait said.

"We'll give him a medical check-up to examine the impact his smoking has had on his health, and he'll be given psycho-social therapy to divert his attention from smoking to playing," he said.

Indonesia has the world's highest percentage of young smokers, according to a World Health Organisation (WHO) report from 2006, which found more than 37 percent of high school and university students smoked.

The report found 25 percent of children between the age of three and 15 had tried smoking.

A two-year-old boy on Sumatra island kicked the habit with a similar treatment after a video emerged in 2010 of the overweight toddler drawing heavily on a cigarette. His parents admitted he smoked 40 cigarettes a day.

Smoking rates have risen six-fold in Indonesia over the last 40 years, with 89 million Indonesians in a population of 240 million smoking today, WHO data shows.

The government has done little to regulate big tobacco's activities in Indonesia, other than increasing excise taxes.

But prices remain extremely low by international standards, with a pack of 20 costing little more than a dollar.

After food, cigarettes account for the second-largest household expenditure, with half the population still living on on less than $2 a day.

Do you smoke cigarettes daily? Use medindia smoking risk calculator and calculate your reduced Life Span due to Smoking.
Advertisement
<< Art Improves Quality of Life in Stroke Survivors
Sex Workers From Asia More Likely To Be Infected by HIV >>