Edible Insects Could be the Wonder Food of the Future 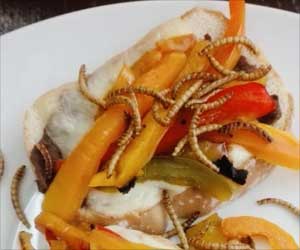 Eating edible insects could be a viable solution to overcome the global food crisis, reports a new study. The findings of the study are published in the journal Comprehensive Reviews in Food Science and Food Safety.

Edible insects could be a key ingredient to avoiding a global food crisis, according to a new report, but there are significant barriers to overcome before they are part of the mainstream.


The rapidly changing climate and an expanding global population are serious risks for worldwide food security. Edible insects have a high nutritional value and significantly lower carbon footprint compared to meat production and are a viable option as a sustainable source of protein. Despite this, edible insect cultivation remains rare in Western countries, where eating insects is still considered unusual.


‘Insect farming: Eating edible insects could be a viable option as a sustainable source of protein and a key to tackle the global food crisis in the future. So, lets eat grubs.’
Read More..


In a new study, researchers from the University of Leeds and the University of Veracruz in Mexico have reviewed current insect farming methods, processing technologies and commercialization techniques, as well as current perceptions towards entomophagy - the practice of eating insects.

Their report is published in the journal Comprehensive Reviews in Food Science and Food Safety and reviews research collected from around the world. It highlights that the benefits of increasing insect consumption have been widely explored, but not the technological and processing approaches that can help achieve this goal. The researchers emphasis that commercialization and processing techniques that focus on the preferences of the younger generation is the best way to normalize edible insects.

Study author Dr. Alan-Javier Hernández-Álvarez from the School of Food Science and Nutrition at Leeds said: "Edible insects are fascinating. Although humans have eaten insects throughout history, and approximately two billion people around the globe regularly eat them today, research on the subject is relatively new.

"Edible insects could be the solution to the problem of how to meet the growing global demand for food in a sustainable way.

"The 'ick factor' remains one of the biggest barriers to edible insects becoming the norm. Eating behavior is shaped largely during early childhood and in Western countries, eating insects, especially in whole and recognizable forms, remains something seen mostly on TV shows.

"In some European countries, consumers, particularly young adults, have shown interest in new food products that use insects in un-recognizable form, such as flour or powder used in cookies or energy drinks. Developing efficient large-scale processing technologies that can develop insects powders could go a long way to helping introduce insects as a common source of protein and nutrients."

Study author Dr. Guiomar Melgar-Lalanne from the University of Veracruz said: "In Western countries, it is the younger generation that show more willingness to try new food products, including edible insects. The 'foodies boom' and the rise of veganism and flexitarians have opened the door to alternative food sources.

"However, in some countries where insects have been part of a culinary tradition, such as Mexico, Nigeria, and Botswana, negative perceptions of eating insects have taken root. In these countries the younger population is rejecting insects as a food source, associating it with poverty and a provincial mindset.

"In Mexico, for example, where insect markets are increasingly popular among tourists, self-consumption, harvesting, and farming are declining in rural areas. Despite the growing demand for edible insects in urban areas, harvesting and indoor farming is limited because farmers associate insects with poverty and do not see it as a potential source of income.

"Promoting insects as an environmentally sustainable protein source appeals to the current attitudes in the younger generation. Another successful strategy involves serving insects as snacks between meals, which would increase the inclusion of insects in daily diets. These types of snacks are increasing in popularity in the global market.

"But if edible insects are to become a common food source, current farming techniques and technologies could struggle with the demand and need to be expanded."

Compared to meat production, insect farming uses much smaller amounts of land, water, and feed, and it is possible to cultivate them in urban areas. Insect farming also produces far fewer greenhouse gases.

However, more development is needed in large-scale insect farming. Increasing demand could create a bottleneck in the production of more edible insects in an economically efficient, safe, and sustainable matter. The lack of availability creates accessibility issues and therefore reduces opportunities for increasing trade. There is a significant need for a technological leap from wild harvesting to indoor farming.

Improvements to edible insect farming and processing techniques could also open the door for increasing the use of insects for other purposes. Chitin extracted from certain insect exoskeletons has the potential for use in food preservation. It also has a number of industrial applications such as surgical thread and as a binder used in glue.

Dr. Hernández-Álvarez added: "Food is only the tip of the iceberg for insects' sustainable potential.

"Refining extraction technologies could make insects a feasible and sustainable option for replacing some currently available functional ingredients. These aspects should be a focus of future research and technological development." 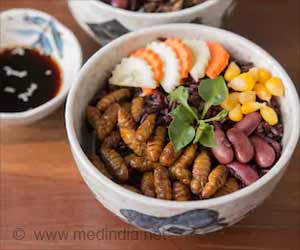 Insect Milk - The Next Superfood
Entomilk - a special milk made from farmed insects has a high protein content and is rich in minerals such as iron, zinc and calcium.
READ MORE

Eating Crickets Benefit Your Gut Health
Crickets can be a novel food which benefits gut health even when given in high doses as it is rich in nutrients, finds a new study.
READ MORE

Why Do We Eat - Nutrition FactsDiet Lifestyle and Heart DiseaseHunger Fullness and Weight ControlLabel Lingo on Food Items: DecodedComplete Natural Wonder FoodsVector-Borne DiseasesTips for Healthy Fasting During RamadhanTop Diet Foods that Make you FatTop Food for DietersSelenium - Natural Source Better than Supplements
Sign up for Wellness Consult a Doctor Sign up for Selfcare