Edible Fashion On the Ramp: Dresses Good Enough to Bite Into 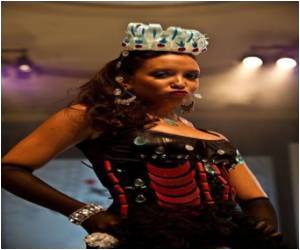 At first glance the train on the dress designed by Maria Chaconas appeared to be made from crystals, and the necklace sported by a former Miss DC looked as if it were fashioned from beads and wood.

But the fluffy material trailing Chaconas's "Chronicles of Narnia"-inspired White Witch dress was actually sugar, and the baubles adorning the onetime Miss DC were a mixture of chocolate and sugar.

Canadian designers DSquared waved a magic wand on Friday to reveal a black-and-red collection amid smoke and seduction at Milan Fashion Week.
Advertisement

At Monday's charity Des Alpes Chocolate Fashion Show, only the name gave away what these culinary experts were really using to cook up their dream gowns.


While walking down a runway swathed in confectionery might seem challenging, none of the models had any trouble controlling their costumes and Miss DC, who modeled a Cruella De Vil-inspired costume, was even accompanied by a dalmatian.

It is Fashion Now in Bollywood to be Slim

Bollywood actresses are slimming down, as an increasing vogue for showing bare flesh on screen and Western ideas about body size and beauty take hold in India's big cities.
Advertisement
The ninth annual Sweet Charity event, which benefits DC school libraries, and the corresponding fashion show challenges local chefs to take on the daunting task of creating an outfit from edible treats.

Each outfit must correspond to an annually-selected theme -- "Literacy on the Silver Screen" being this year's task.

"Everything about this challenge is hard," Musser said. "A lot of chemistry is involved when creating an outfit. Chocolate when making a dress is more complex, because it is going to start melting as soon as she puts it on."

She found a way to combat the problem by backing every one of her chocolate pieces with felt.

Chef Chad Dunkin used the theme for this year to create an outfit inspired by Alfred Hitchcock's "The Birds."

He created chocolate-dipped crows, which he perched around the model's dress, and designed a chocolate purse, only to have it melt on the way to the show.

"The transport for me is the hardest part," he said. "It's hard to work with chocolate because it melts."

Dunkin recommended that competitors try things out their outfits first on dummies to work out what is feasible. "I don't think that many people practice before they come," he said. "It can show when you see parts starting to fall off."

Chaconas opted to avoid chocolate, using pulled sugar and pastiche for her outfit.

"It's key to think about the materials and can they last for three hours," she said. "You have to be in costume three hours before the show starts and that is one of the most difficult parts about it."