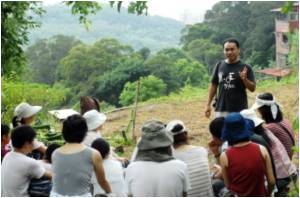 Ji Yunliang worked as a missile researcher at a large state-owned enterprise and later earned a doctorate in chemistry at a prestigious Beijing university. Now, he is running a small organic farm.

In a country hit by a series of food safety scandals, the interest in organic produce is growing fast.

If there is such a thing as a non-violent bomber, Taiwanese farmer Yang Ju-man seems to be exactly that.
Advertisement

Instead of using his cutting-edge technical expertise, Ji is employing traditional methods and old-fashioned manual labour to battle pests and weeds on his property on the northern outskirts of the Chinese capital.


"When I got a taste of organic farming, I realised I had reached a turning point in my life," Ji said, picking some worms off of a leaf of basil.

Organic farming has become popular in the world, and so in India also. Farmers in Ferozepur district in Punjab are slowly dumping chemical farming in favor of organic farming.
Advertisement
"In a way, it totally goes against what I learned as a chemistry student."

Despite fetching prices up to five times higher than regular produce and limited options on offer, the demand for organic foods is surging in China, where consumers are paying closer attention to what they eat.

The market is now worth around five billion yuan (732 million dollars) and demand is expected to increase 20-30 percent a year in the next five years, said Huang Dejun, chief analyst with Beijing Orient Agribusiness Consultants.

"The Chinese economy has been growing by double digits. People are getting affluent and they are demanding a better quality of life," Huang said.

In 2008, at least six babies died and 300,000 others fell ill when the industrial chemical melamine was used to give dairy products the appearance of having a higher protein content -- a scandal that shocked the nation.

So far this year, pesticide-tainted chives, toxic string beans and unsafe pears have all been pulled from shelves.

Rather than spread potentially harmful herbicide at his 0.7-hectare (1.65-acre) De Run Wu vegetable farm, Ji opts for straw mulch, which he says is just as effective.

He intersperses different crops to stave off pest infestations and the spread of plant diseases.

His farm can supply produce to up to 200 families in summer and 100 in winter, he said. His best clients pay a lump sum of 5,500 yuan (805 dollars) to get weekly home deliveries throughout the year.

"We are doing this to maintain biological diversity and recover the ecological system," Ji said.

Shi Yan -- the manager of the Little Donkey Farm, another organic operation outside Beijing -- says consumer interest in organic produce shows "everyone is concerned about the safety of our food".

Her farm had only 54 clients when it opened last year. This year, 320 families have so far signed up.

They can either rent a piece of land under a work-share programme that allows them to farm at weekends, or get deliveries and contribute at least 10 hours of work every farming season.

"Farming with chemicals in the past few decades depleted the soil and harmed the environment," said Shi, who is a doctoral candidate in agricultural development at the People's University of China.

"More and more people have now realised the root cause of food safety problems ... so they are willing to participate," she said.

"I think it is better to have food and drinks that are made naturally and do not grow from too much synthetic fertilizer," she said as she dumped a giant scoop of sesame residue into her lettuce field.

She says she often brings her young granddaughter to the farm to learn "things in reality that cannot be acquired from books".

The friends Yu has invited to work in the fields with her are all keen to get a piece of land as well but will have to wait until next year for a vacant spot, she said.

"I will certainly continue to rent (the land). The longer, the better," she said with a smile.

Analysts have said organic food will remain a niche product in China due to limited supply, especially as pristine air, water and soil conditions needed for organic farms are increasingly hard to find in fast-industrialising China.

"China has a huge population while the yield of organic farming is too low," Huang said.

"It does not have the resources to produce enough organic food to supply the entire population."

The farmers adopting organic farming will be promoted by means of the following measures.
Advertisement
<< High Blood Sugar in Pregnancy Raise Diabetes Risk in Childr...
Edible Fashion On the Ramp: Dresses Good Enough to Bite Int... >>