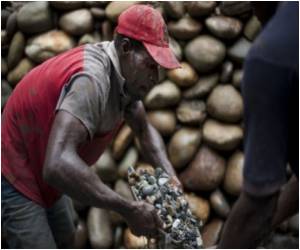 Luis Americo Mosquera, 52, is repeating the same gestures passed on from generation to generation of Colombia's black slaves brought by the Spanish conquistadors to toil in gold mines for centuries.

In the city of Tado in the western Colombian department of Choco, known for its large Afro-Colombian population, each gold digger is his own master and the gold is removed from alluvia by using a plant mixture.


This ecologically-friendly process caught the attention of Oro Verde, a Colombian group that has trademarked gold mined in this fashion with Choco residents, allowing families to secure more income than the norm for their work.

Researchers have identified two compounds emitted by mosquito predators that make the mosquitoes less inclined to lay eggs in pools of water.
Advertisement
Oro Verde gold is sold for two percent higher than the market price and jewelers pay a 13 percent premium that funds local development projects reaching families who have owned the land for generations.

Under the program, workers "cannot use toxic products like mercury, must not kill fish and other aquatic species, must restore any layer of soil that is removed and fill it so that it is suitable for replanting," explained Luis Alfredo Hurtado of the Asocasan association that verifies the criteria are met.

Some 194 families have adopted the program in the region, including 112 living in and around Tado.

"We are also helping grocers, shoe vendors, clothing vendors. Many people benefit from the program, even if they don't work directly" with gold, said Americo.

Green gold mining goes against the grain of the new gold fever that has spread across Colombia as the precious metal snatches record prices on the market -- it hit 1,260 dollars per ounce in mid-June.

As soon as miners hit a gold vein, unscrupulous entrepreneurs, sometimes financed by illegal paramilitary groups, show up with a dozen excavators to churn the soil and divert rivers before using toxic mercury to separate the gold from the alluvia.

The Zaragoza mine, located close to Buenaventura, has cause so much environmental damage that officials have recently declared a state of emergency in the region.

Careless entrepreneurs "use undeclared labor, including children, and ruin the environment," said Arturo Quiros, who heads the Association of Colombian Miners (Asomineros).

In 2009, Oro Verde won the international Seed prize for promoting sustainable development. The award is sponsored by the United Nations and the International Union for Conservation of Nature (IUCN).

The Colombian project, associated with a dozen others in South America, has now been entered on the Fairtrade Foundation's international list of environmental labels. Gold certified as having been mined in this way will bear Fairtrade and Fairmined marks.

The label will be launched first in Britain and later rolled out to other countries in an attempt to capture five percent of the gold jewelry market over 15 years, for a total of 15 tonnes of fairly traded gold each year.

But the 14 kilograms (31 pounds) of gold already produced by Oro Verde's gold washers has already reached 11 countries, including Canada, Denmark, France, Germany and the United States.

Bangladesh Jute Gets Boost, Thanks to Eco-friendly Western Consumers

Western consumers who shun environmentally unfriendly plastic bags are helping to revive the traditional jute industry in Bangladesh.
Advertisement
<< Getting on a Flight With Your Pet A Lot Easier Now
Pills That Can Shrink Skin Tumors Developed >>