Getting on a Flight With Your Pet A Lot Easier Now 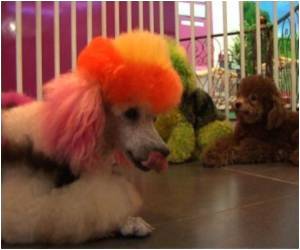 Thanks to a program called Guaranteed On Board by the Sherpa Pet Group, pet owners who want to take along their furry friends while they travel shouldn't worry anymore about being turned away at the airport gate.

The program provides pet owners with the vital information they need, including which pet carriers are compliant with airline regulations and which airlines require a recent pet health certificate before travelling - preventing any last-minute surprises at boarding time.

Facebook Goes to the Dogs - and Cats and Birds and Others!

Social networking site Facebook is said to literally be going to the dogs - and cats too, as pet owners create profiles for their furry friends.
Advertisement

Many airlines, including American, United and Delta, have teamed with the Sherpa Pet Group in hope of easing the stress involved with lugging along a pet.


If a passenger does get turned away at the airport and misses a flight because of their pet carrier, the Sherpa Pet Group guarantees to refund the cost of the individual's ticket and their pet's airline travel fee.

'Ultimate Dog Car' Comes As A Blessing To Pet Owners

Wish to see your pet well secured in the car, and having car seats free of dog hair and slobber? Well, then Honda's new 'Element' might be the your saviour.
Advertisement
"For years, we've been getting a lot of customer service e-mails asking: 'Is my carrier the right size? Are you sure it will fit? Do you guarantee I will get on the plane with my pet? What happens if I cannot get on the flight?'" the New York Daily News quoted Tim Ford, CEO of the Sherpa Pet Group, as saying.

He explained that consumers would frequently tell him airline Web sites would say one thing about the dimensions of their carrier and the Sherpa site would say another.

"There was a lot of uncertainty. We could not guarantee the program because it depended on the airline attendant who was supervising that day. This program guarantees the airlines will educate their staff about these requirements," added Ford.

Unlike the hard-sided pet carriers that many of the airlines are familiar with, the Sherpa carriers are soft-sided and have a special patented design that allows the carriers to be pushed down and conform to underseat dimensions, according to Ford.

Pets eligible for the program must weigh a maximum of 22 pounds, although some airlines' requirements vary in weight.

American Airlines, which transports more than 100,000 pets per year - half in the cabin and half in pet carriers as checked baggage - was the first airline to team with the Sherpa Group to implement the program.

Cat owners are more likely to be female and younger than those who don't own cats, indicate the results of a household survey.
Advertisement
<< In China, NGO Give Prisoners' Children Hope and a Fresh Sta...
Eco-Friendly Gold Mining Benefits Deep in Colombian Jungle >>