Easily Accessible Areas can be Checked for Cancers Deep Within 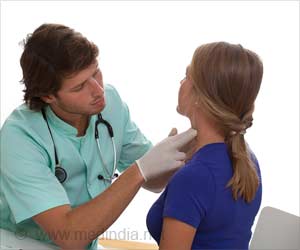 Backman's potentially life-saving technology, called nanocytology, works by harnessing the power of light to examine cells from easily accessible areas of the body. A swab of cells from one area, such as inside the cheek, can uncover malignancies in a nearby organ, such as the lungs.

Advertisement
‘Using nanocytology, cancer diagnosis will be as easy as examining an easily accessible area of the body to uncover cancer malignancies within or in a nearby organ.’

When researchers shine light onto the harvested cells, photons bounce off the nanostructures within them. The different angles of scattered light tell a story about the health of the cells, and additional analysis can lead to an accurate diagnosis at even the very earliest stages of cancer formation.


Using these bio-optic techniques, Backman can detect details indicative of "pre" pre-cancer, something that formerly could not be done with conventional microscopes.
Advertisement
Backman compares his diagnostic work to the development of the Pap smear. Prior to the introduction of this simple, low-cost test, cervical cancer was a top cause of cancer death among women. Before the pap smear, cervical cancer was detected via colposcopy, a more complex procedure. Once the Pap smear was introduced, all women could be screened for a relatively low cost. Those whose pap smears showed abnormalities could then be referred for colposcopy.

"That alone, with no changes in therapeutics, reduced cervical cancer mortality 20 times in the United States," said Backman, the Walter Dill Scott Professor of Biomedical Engineering in Northwestern's McCormick School of Engineering. "In fact, today, essentially nobody dies from cervical cancer if they're part of the Pap smear screening program. You're not going to get invasive cervical cancer if you get regular pap smears. Period."

Backman has developed the technique for lung, ovarian, esophageal, pancreatic, breast, colon and prostate cancer. Backman believes the screen will be available during routine doctors' appointments within the next three years and predicts it could cut cancer-related deaths in half.

New Cutting Edge Technology Offers Revolution in Detailed Cancer Diagnosis
A new imaging technology to grade tumour biopsies has been developed by a team of scientists led by ...

Breast Density No More a Limitation for Breast Cancer Diagnosis
With over a 99 percent negative predictive value, a liquid biopsy test can help clinicians manage .....

Existing Illnesses may Delay Bowel Cancer Diagnosis
During cancer diagnosis, other diseases can be a distraction because they also require attention or ...