Use of Nanotheranostics for Cancer Diagnosis, Treatment 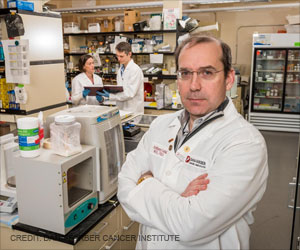 Cancer therapy describes the treatment of cancer in a patient, often with surgery, chemotherapy and/or radiotherapy. Targeted therapies are also available for some cancer types.

Three teams from BRICS countries, including Russia and India, plan to embark on a project that uses the benefits of nanotechnology to simultaneously bundle both diagnostics and therapy into one package for treating cancer just like paintball activity.

Advertisement
‘Researchers wanted to develop biodegradable nano-sized vehicles which would be loaded with anti-cancer drugs and/or radioisotopes used for cancer imaging (through SPECT and PET) and treatment.’

Dubbed nananotheranostics' (abridged from therapy-diagnostic), this emerging advanced nano-medicine helps customising treatment for the patient and also shorten time between diagnosis and therapy of a disease, all with one pharmaceutical agent.


Like those James Bond-style GPS tracking devices, nanotheranostics allows monitoring drug delivery, movement of drug and therapeutic responses, enabling treatment strategies to be modified according to changing needs of the patient.
Advertisement
As tackling cancer is not a one-size-fits-all scenario, nanotechnology provides the means for more precise and earlier tumour localisation and more efficient treatment with less secondary effects.

Countries such as the US, UK, France and Germany are leading in nanotheranostics for personalised medicine.

To tackle cancer burden in the BRICS bloc, three teams representing Brazil, India and Russia have framed the "Development, Characterisation and Evaluation of Nanoradiopharmaceuticals for Breast and Prostate Cancer Imaging, Diagnostics and Treatment" project (DCEN-4-BRICS).

Nabiev said the idea is to develop biodegradable nano-sized vehicles which would be loaded with anti-cancer drugs and/or radioisotopes used for cancer imaging (through SPECT and PET) and treatment.

Imaging techniques "methods of producing pictures of the body" are important element of early detection for many cancers and are also important for determining the stage (telling how advanced the cancer is) and the precise locations of cancer.

In addition to the cargo of drugs and radioisotope, these nano carriers would also be labelled with fluorescent quantum dots (QDs) to make them visible and tagged with single-domain antibodies for cancer specific recognition.

"These nano carriers will recognise and bind specifically to the tumours," Nabiev said.

Due to the QDs, the tumours can be seen optically and courtesy the radioisotopes, they can be visualised through imaging techniques (SPECT, PET) once these nano scale structures stick to the tumour.

And ultimately, on attaching themselves to the tumours, these drug-loaded nano carriers can release the drug to the tumour site and kick-off treatment.

All in one go.

The three-year long project is in the final stage of submission.

"It has just been submitted in India, it will be submitted on November 28 to BRICS secretariat and Brazilian funding body, and by November 30 deadline to Russian Foundation for Basic Research," informed Nabiev .

"The total cost for this first stage of the three-year-long project which should demonstrate the proof-of-proposed-principle is nearly 150,000 USD per year."

"Furthermore, we expect that the DCEN-4-BRICS project will create not only a solid Brazil-Russia-India collaboration background, but also a synergy for wider collaboration and nano medicine network involving the other BRICS countries," Nabiev said.

The BRICS bloc has been recognised for its potential to influence global health, with the Director General of the WHO, Margaret Chan, commenting in 2011 that "BRICS represents a block of countries with a great potential to move global public health in the right direction towards reducing the current vast gaps in health outcomes and introducing greater fairness in the way the benefits of medical and scientific progress are distributed".

Finally, this project will include student exchange programmes for drug delivery system development.

"Doing this, we will promote nanomedicine and nanoradiopharmacy and offer new undergraduate and graduate programs, thus providing unique impetus to the careers of young researchers for all collaborating partners," he added.

Source: IANS
Advertisement
<< Recommendations for Hepatitis B, Vaccination and Care
Here is a List of Crunchy Melt-In-The-Mouth Winter Delights >>

Cancer Drugs Can also Treat High Blood Pressure
Hypertension or high blood pressure can be controlled with the use of fibroblast growth factor ......

Scientists Discover How to Switch Liver Cancer Cell Growth
The liver cancer cell line is an important cell line for the pharmaceutical industry for testing ......