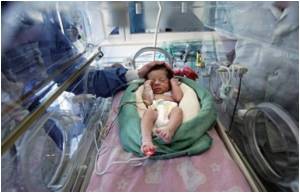 Doctors said their work challenged widely held views that babies born after 37 weeks had similar long-term outcomes to those born at full term.

Learn more about Asthma, a chronic childhood disease with the highest incidence.
Advertisement

The research was carried out by the universities of Leicester, Liverpool, Oxford and Warwick and the National Perinatal Epidemiology Unit.


It looked at 14,000 children in the UK, born 10 years ago, up to the age of five and studied health outcomes, including admissions to hospital and having illnesses such as asthma.

If you are trying to find out whether you have conceived this time around, you can ask other people, worry in silence or take this quiz on early signs and symptoms of pregnancy.
Advertisement
Previous work has focused on babies born very prematurely, before 32 weeks, but this study suggests that the higher number of babies born later may also need extra attention.

The study found that babies born during this time have a slightly higher risk of health problems up to the age of five. The earlier the baby arrived, the bigger the risk.

For example, 15 percent of babies born full term experienced asthma or wheezing as young children but the figure increased to 17 per cent for those born just a few weeks early.

They were also slightly more likely to go into hospital.

Study authors stressed that parents should not worry about what was a modest chance of extra illness. Rather their work should be used to question the level of healthcare support and monitoring given to these families.

"We've found that it's no longer appropriate, as we have done previously, to think of babies as either being born at term or premature," the BBC quoted Dr Elaine Boyle, from the University of Leicester, as saying.

"What we've found is that there is a gradient of increasing health risk with increasing prematurity but this risk stretches right up until the time at which a baby should be born," she said.

The study was published in the British Medical Journal.

Pregnancy Confirmation Calculator Noscaphene (Noscapine) Drug Side Effects Calculator Sanatogen Accident and Trauma Care Find a Doctor Daily Calorie Requirements Turmeric Powder - Health Benefits, Uses & Side Effects Hearing Loss Calculator The Essence of Yoga
This site uses cookies to deliver our services. By using our site, you acknowledge that you have read and understand our Cookie Policy, Privacy Policy, and our Terms of Use