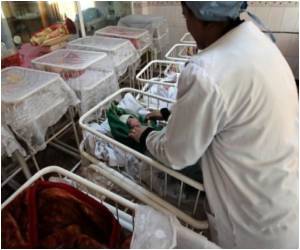 A decrease in the Infant Mortality Rate (IMR) from 50 to 47 infants deaths per 1000 live births during 2010 has been recorded by RGI.

The IMR for rural areas has dropped by four points from 55 to 51 infant deaths per 1000 live births while the urban rate now stands at 31 from the previous 34/1000.

Goa still has the lowest IMR of 10 infant deaths followed by Kerala with 13 infant deaths per 1000 live births (as against 12/1000 in January 2011 figures) - the Urban IMR in Kerala has however reduced to 10 against 11 of previous figures.


Madhya Pradesh, on the other hand has the highest IMR of 62/1000 followed by UP and Odisha with 61/1000 IMR. States/UTs of Assam, Bihar, Chandigarh, Haryana, Rajasthan, Meghalaya still have IMRs more than the national average of 47.

A new study has shown that that Internet kiosks providing information on prenatal and postnatal care for mother and baby have helped reduce infant, child and maternal mortality rates in rural India.
Advertisement
The Sample Registration System (SRS) is a large-scale demographic survey for providing reliable annual estimates of birth rate, death rate and other fertility and mortality indicators at the national and sub-national levels. The field investigation consists of continuous enumeration of births and deaths in selected sample units by resident part time enumerators, generally anganwadi workers and teachers, and an independent survey every six months by SRS supervisors

A-Z Drug Brands in India Turmeric Powder - Health Benefits, Uses & Side Effects Blood - Sugar Chart Accident and Trauma Care Hearing Loss Calculator Drug Side Effects Calculator Noscaphene (Noscapine) Diaphragmatic Hernia Sanatogen Calculate Ideal Weight for Infants
This site uses cookies to deliver our services. By using our site, you acknowledge that you have read and understand our Cookie Policy, Privacy Policy, and our Terms of Use