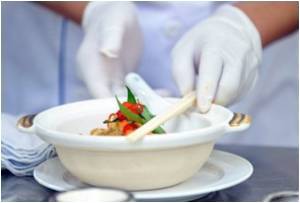 A new study has found that a diet rich in natural antioxidants may improve insulin resistance in obese adults.

"The beneficial effects of antioxidants are known, but we have revealed for the first time one of their biological bases of action-improving hormonal action in obese subjects with the metabolic syndrome," said principal author Antonio Mancini, MD, an endocrinology researcher at Catholic University of the Sacred Heart in Rome.

Antioxidants enhance the effect of the insulin-sensitizing drug metformin, which is beneficial to people who suffer from the syndrome wherein they cannot efficiently use insulin, the hormone that regulates glucose (sugar) in the blood.


Some evidence exists that oxidative stress may play a role in the metabolic syndrome, according to Mancini. Oxidative stress, a biochemical mechanism that can lead to damage to blood particles and to cells, results from an imbalance between an excessive amount of oxidants and decreased antioxidant defenses. Oxidative stress also plays a part in aging.

"We are indeed much more than what we eat, but what we eat can nevertheless help us to be much more than what we are". - Adelle Davis There are thousands out there battling 'the bulge'. With childhood obesity on the rise even children are not spared. If your weight issues are threatening to weigh you down learn more about obesity by taking part in this quiz.
Advertisement
Antioxidants, which are found naturally in fruits, vegetables, and legumes and nuts, include vitamins E and C, selenium and carotenoids, such as beta-carotene.

In a study that included 16 men and 13 women, ages 18 to 66 years, who were obese and insulin-resistant, but were not yet diabetic, Mancini and his colleagues studied the effects of dietary antioxidants on insulin resistance. The groups were put on a low-calorie, Mediterranean-type diet. Group A only ate this kind of diet, and group B ate the same diet plus took the drug metformin. For groups C and D, the researchers prescribed a diet enriched in antioxidant, with a calculated intake, 800 to 1,000 milligrams a day, coming from fruits and vegetables, but group D also took metformin.

The team found that the group D had the best improvement in insulin resistance on some measures of insulin response to an oral glucose tolerance test.

"We think that a total antioxidant level of 800 to 1,000 milligrams a day is safe and probably not close to the maximum tolerable level," said Mancini.

Morning breakfast is an important meal of the day, especially for Indians. Eating a healthy breakfast is a must as it keeps them active all day. So, try out these eight healthy Indian breakfast recipes and reap numerous health benefits for a healthy mind and body.
Advertisement
<< Sex Education to Curb Birth Rate in Philippines Sparks Deba...
Omega-3 Supplements Effective Against Depression >>

Superfoods should be a part of daily diet as they are packed with nutrients and healing properties.But the best part is that they are tasty too!
Advertisement
News A-Z
A B C D E F G H I J K L M N O P Q R S T U V W X Y Z
What's New on Medindia