Concern Over Rising Suicides In US Army 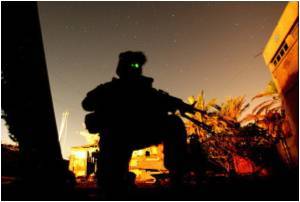 Death on the battlefield or a trigger pulled inside the camp, which should be of greater concern? The US authorities don't seem to have a clue to either phenomenon anyway.

A total of 32 soldiers, both active duty and reserve, took their own lives in those 30 days. So far this year, 145 soldiers have committed suicide compared with 130 during the first six months of last year, which at the time was the worst on record.


In the wake of the 2007 scandal regarding deplorable conditions at the supposedly renowned Walter Reed Army Medical Center, the Army promised to do better by its veterans and established a program they call Warrior Transition Units (WTU).

Are you anxious to know your anxiety level? Use Medindia's Anxiety Screening Test, a simple online screening test for anxiety symptoms.
Advertisement
On paper, WTUs were meant to provide a therapeutic, supportive environment where injured soldiers could recuperate and return to duty or gently process out of the Army. There are currently about 7,200 soldiers at 32 transition units across the Army, with about 465 soldiers at Fort Carson's unit. But then the word from traumatized veterans accepted into the program is that going back to Iraq would be preferable.

The New York Times recently interviewed Specialist Michael Crawford who served as a sniper in Iraq and came home a suicidal wreck after suffering several concussions during IED explosions and witnessing several platoon mates burn to death. Crawford's mother recognized her son's life-threatening distress and, together, they did what it took to get Crawford into the WTU at Fort Carson in Colorado Springs.

Once he was admitted into Fort Carson's WTU, Crawford's situation quickly spiraled downward until the Crawford's worst fears were realized: Michael attempted suicide. (At least four soldiers in the Fort Carson unit have committed suicide since 2007, the most of any transition unit as of February, according to the Army).

Crawford's treatment plan in the WTU consisted of daily handouts of medications for anxiety, nightmares, depression and headaches that made him feel listless and disoriented; and a weekly session with a nurse case manager. In addition, patients are expected to keep up a semblance of military rigor despite the fact that they are heavily drugged. The noncommissioned officers in charge of the units run them like boot camp, haranguing and disciplining patients when they arrive late to formation or violate rules.

"These guys are still soldiers, and we want to treat them like soldiers," said Lt. Col. Andrew L. Grantham, commander of the Warrior Transition Battalion at Fort Carson. But many soldiers at Fort Carson complained that discipline and insensitive treatment by cadre members made wounded soldiers feel as if they were viewed as fakers or weaklings. In many cases, the noncommissioned officers have made it clear that they do not believe the psychological symptoms reported by the unit's soldiers are real or particularly serious.

There have also been reports that senior officials pressurize psychiatrists not to diagnose post-traumatic stress disorders at all, with disastrous consequences all round.

An average of 950 suicide attempts are reported each month by veterans who are receiving some type of treatment from the Veterans Affairs Department. Seven percent of the attempts are successful, and 11 percent of those who don't succeed on the first attempt try again within nine months.

Now the army has released a suicide prevention video in which Spc. Joseph Saunders, distraught over the breakup of his marriage, described how he tried to kill himself.

"I put the rifle up to my chin, put it on semi, and I pulled the trigger," Saunders said in the video.

But the gun didn't go off. He was saved by a buddy who had spotted the warning signs.

"He says, 'Yes, I took your firing pin; I took it last night,'" Saunders said in the video. "He says, 'You were worrying me.'"
The new video replaces an earlier attempt at suicide prevention using actors, which Army officials now admit soldiers viewed as a joke. The Army hopes hearing real soldiers talk about their close encounters with suicide will help remove the stigma of admitting to mental problems.

"I laid on the floor of my bedroom while my wife pleaded with me not to take my life," another soldier said in the video.

"If you do this, who benefits?" his wife asked in the video.

Not all the soldiers who committed suicide in June had served in Iraq or Afghanistan, but there is no doubt it is the stress of nine years of war which has driven the Army suicide rate above the national average. Sgt. Coleman Bean had done two tours in Iraq.

"I was so grateful that he come home in one piece that I was willing to say that drinking too much was blowing off a little bit of steam," his mother Linda Bean said.

Until one day in 2008, he killed himself. For Bean, the latest suicide numbers confirm the tragic lesson she learned: for all the efforts the Army is making to prevent suicide, soldiers need more help than they are getting. "We are going to continue to lose young men and young women and daughters and sons, and I think it's a damn shame," Bean said.

Sen. Benjamin Cardin (D-MD) has now proposed an amendment to the 2010 Defense Appropriations bill for a study into the military suicide boom.