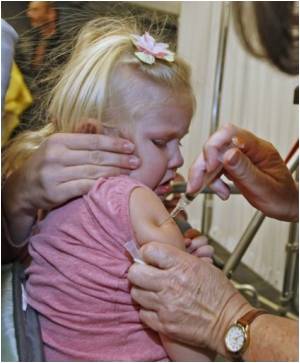 In some good news for doctors and patients alike, a 'universal' flu vaccine could be the 'one fits all' jab - a new two-step approach to immunisation.

Working with mice, ferrets and monkeys, the US team 'primed' the immune system with a 'base' of influenza DNA.


They added a 'booster' consisting of a regular seasonal flu vaccine, which increased and broadened its immunity.


According to The Telegraph, early safety trials of the vaccine have already started and it could be tested on patients as early as 2013.

Flu viruses are notorious for their ability to mutate and become resistant to vaccines.

Antibodies target a lollipop-shaped flu virus surface protein called haemagglutinin (HA). But the structure of the protein's "head" mutates readily, allowing the virus to go undetected when it changes form.

The new vaccine generates 'universal' antibodies that aim for the 'stick' of the HA lollipop, which varies little from strain to strain.

"This a new and interesting approach and they are a very respected group. I would take this very seriously. They seem to have identified a universal or general antibody that attacks many different types of virus," said Professor John Oxford, Britain's leading flu expert and a virologist at St Bart's and Royal London hospitals.

The find is published in the journal Science.