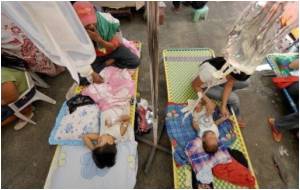 Due to leakage of chlorine gas from Chemfab Alkalis Limited in Pondicherry, about 300 people staying near that area had to be hospitalized at the Indira Gandhi Government Hospital following complaints of respiratory problems, eye irritation, nausea and vomiting. This mishap occurred when one of the cylinders leaked while workers at the factory were filling chlorine gas in the 900 kg cylinders. None of the 300 workers in the factory were affected by the leakage as wind blew away the leaked gas to a nearby village.

Constable Succumbs to Chlorine Leak While Saving Others

Medical superintendant at the hospital said, "None of the people admitted are in a serious condition. Till afternoon, only around 70 people were admitted. But after 12.30 pm, the number of people being admitted has increased. Now, there are around 300 people. We will review their condition and discharge around 250 of them later today."

The Union Territory's administration has ordered immediate closure of Chemfab Alkalis Limited which makes caustic soda lyke, liquid chlorine, hydrochloric acid, sodium hypochlorite, hydrogen gas and barium sulphate. According to Pondicherry district collector Mr. Rakesh Chandra the administration may soon announce an ex-gratia amount which could be claimed as per the procedure laid in the Industries Act.

The EU parliament attacked Thursday, plans by the European Commission to lift an import ban on US poultry washed in chlorine.
Advertisement
Advertisement
This site uses cookies to deliver our services.By using our site, you acknowledge that you have read and understand our Cookie Policy, Privacy Policy, and our Terms of Use  Ok, Got it. Close
×