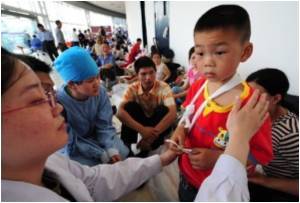 Shattered by the death of her daughter in China's 2008 Sichuan earthquake, it took Ren Yunhui six months to even think about having another child, but she is now the proud mother of a baby girl.

"I'm slowly recovering from the pain, but you can't recover all at once," said Ren, 38, one of thousands of women who have conceived again after they lost their only children in the devastating 8.0-magnitude quake.
Advertisement

"I will never be able to forget the first child. I think of her all the time," she added as she bathed nine-month-old Wang Renyue in her flat in remote Shihua village in the southwestern province of Sichuan.


Her daughter Wang Mengyao, 14, was one of more than 5,300 children who died when their shoddily-built schools crumbled in the May 2008 quake that left nearly 87,000 people dead or missing and thousands of parents childless.
Advertisement
Since then, a government programme that includes artificial insemination and free medical treatment has seen more than 3,100 women impregnated and 2,000 babies born to mothers who had lost children in the quake.

The sheer number of children who died is a source of controversy in China, with activists jailed for raising the issue of poor school construction and some angry mothers put under surveillance by authorities who fear unrest.

But Ren and other mothers in the village who lost children are focused on coping with a tragedy made all the more poignant in China, where population control policies limit most families to one child.

Authorities relaxed that policy for parents who lost children in the quake or whose kids were disabled, leading to thousands of natural and medically-assisted pregnancies.

But the new bundles of joy can stir up bittersweet feelings, said Xu Rong, project director for Rural Women, an NGO that provides post-quake counselling to stricken residents.

She said even those mothers who have managed to conceive again are haunted by the spectre of their lost child.

"At times, when the women are pregnant, they won't dare go to the tomb of the child they lost, as they're scared that the sorrow will make them miscarry," she says.

Some new mothers carry feelings of guilt towards their lost child and Xu fears the second-borns may bear an extra burden of shouldering the hopes and demands of parents.

"It's easy to compare the existing child to their lost brother or sister... The second-born can think that parents don't consider them as good, and some might not be willing to stay with their parents (as a result)."

But those are problems that someone like Jia Yiqin would love to have.

She has been unable to conceive, and the joy of other mothers serves only as a reminder of her own inability to replace her lost daughter.

"People need their own child for their whole lives," the 38-year-old whispers, her voice frail and quivering as she sits sewing in her bare living room in Shihua.

The pain is etched onto her face as she stares with sad eyes at a picture of her daughter kneeling with her classmates, taken two years before their school collapsed.

Despite the lingering grief, most mothers are desperate to conceive again in a country where the elderly rely on their offspring to support them in old age.

"Chinese people are quite realistic. For them, no matter how much they miss their kid, they still want a new one," Xu said.

Yet even for Ren, the arrival of her baby -- whose chubby, smiley face reminds her of her first child -- has still not erased the shock of the day when the ground shook, taking away 43 children in Shihua village alone.

"I just ran to the school, and saw it had collapsed. There were a dozen lucky ones -- those children who skipped class didn't die, but those studying were killed," she said.

"Having raised her for so long, it's tough, I miss her."

China Quake: Prediction of Similar Calamities in Future Made Easier
A team of geoscientists is studying the May 12 earthquake that hit Sichuan Province in China to ......

Dogs Pick Up Smell of Death in China Quake Rubble
Rifka had picked up the scent of death and bounded into the rubble of the Hanwang Town People's ......

It's an Uphill Task for China's Working Mothers
In modern China, child care is expensive, bosses are less flexible and husbands are no longer the .....