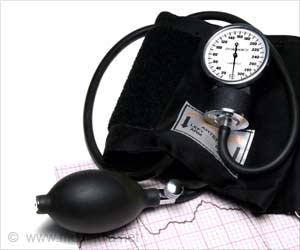 Adults who have survived childhood cancer were found to be twice more at risk of developing high blood pressure or hypertension, reveals a new study.

The study was published in Cancer Epidemiology, Biomarkers & Prevention, a journal of the American Association for Cancer Research.


Improvements in treatment have dramatically increased survival rates from pediatric cancers, with about 83 percent of children surviving at least five years and many becoming long-term survivors. Today, an estimated 420,000 Americans are adult survivors of childhood cancer.
Advertisement
However, many suffer long-term side effects. "High blood pressure is an important modifiable risk factor that increases risk of heart problems in everyone. Research has shown that high blood pressure can have an even greater negative impact on survivors of childhood cancer who were treated with cardiotoxic therapies such as anthracyclines or chest radiation," Gibson said.

To assess the prevalence of high blood pressure among survivors of childhood cancer, Gibson and colleagues examined 3,016 adults who were part of the St. Jude Lifetime Cohort Study, which provides ongoing medical assessments of childhood cancer survivors to advance knowledge of their long-term health outcomes.

The study showed that the prevalence of hypertension was 2.6 times higher among childhood cancer survivors than expected, based on age-, sex-, race- and body mass index-specific rates in the general population.

Certain groups of survivors were the most likely to have hypertension: men; non-Hispanic blacks, older survivors, and those who were overweight or obese, the study showed.

The study found that exposure to radiotherapy or chemotherapy were not significantly associated with hypertension.

Gibson said the lack of association between high blood pressure and radiotherapy and chemotherapy was surprising, and suggests that the connection between childhood cancer survival and adult hypertension is multifactorial and worthy of future research. In the meantime, he said, clinicians should be mindful that survivors of childhood cancer are more likely than the general public to develop high blood pressure.

"The good news is that, unlike prior cancer therapy, high blood pressure is a modifiable risk factor," Gibson noted. "Research is needed to identify effective interventions to prevent hypertension in survivors, but our results emphasize the importance of blood pressure surveillance and management."

Gibson said a limitation of the study is that it was based on blood pressure measurements that were taken at a single study visit. A clinical diagnosis of hypertension typically requires measurements taken at multiple intervals, he explained.

Also, Gibson added, the St. Jude Lifetime Cohort is a group of cancer survivors who undergo frequent clinical follow-up, so its participants may have benefited from being monitored and may, therefore, be in better health than survivors who have less comprehensive follow-up.

Source: Eurekalert
Advertisement
<< High Risk of Opioid Overdose Among Baby-boomers and Millenni...
Oral Insulin May Not Delay or Prevent the Onset of Type 1 Di... >>

Age-related Diseases High Among Thyroid Cancer Survivors
Risk for aging-related diseases such as heart disease and diabetes was significantly higher among .....

Physical Activity Boosts Cognition in Breast Cancer Survivors
Women who exercise have a significant improvement in cognitive processing speed and some ......