Vitamin D is essential to bone health. Some studies have also linked adequate levels of vitamin D with a lower risk of cardiovascular, inflammatory and autoimmune diseases, certain cancers and death. Certain genetic variations increase the risk of having a lower level of vitamin D, revealed a new study by the National Food Institute, Technical University of Denmark.

For the study, researchers examined the effect of eating vitamin D fortified foods or receiving artificial UVB irradiation during the winter months. The fortified diet and artificial sunlight had less of an effect on vitamin D status in people with certain genetic variations. The results can be used to identify people who are genetically predisposed to having lower levels of vitamin D.


During the summer months the majority of Danes get sufficient amounts of vitamin D from sunlight. Vitamin D is synthesized when the sun's UVB rays hit the skin. During the winter months in Denmark the sun's UVB rays aren't strong enough for this process to take place and as such Danes have to rely on their diet and dietary supplements to meet their need for vitamin D.


‘Eating vitamin D fortified diet and exposure to artificial UVB irradiation had less of an effect on vitamin D status in people with certain genetic variations.’


Researcher Janna (Ioanna) Nissen from the National Food Institute has studied the relationship between 25 different genetic variations in seven different genes and the level of vitamin D in her research subjects' blood in late summer and at the end of winter respectively. She has also studied the effect of eating vitamin D fortified bread and milk or receiving artificial UVB irradiation had on the research subjects' vitamin D status compared to their genes.

Her studies show that the two genes CYP2R1 and GC influence the level of vitamin D in a person's blood.

Janna Nissen said, "The results show that carriers of all the genetic risk variants have the lowest vitamin D levels in late summer, the largest drop in vitamin D levels after eating fortified bread and milk during winter and the smallest increase after artificial UVB irradiation compared to carriers of fewer or no genetic risk variants. The study results can be used to identify genetically predisposed individuals who have an increased risk of having lower vitamin D levels. This will be possible in the future by means of a genetic test."

At present it is not clear whether or not individuals who are genetically predisposed to lower levels of vitamin D without being vitamin D deficient have an increased risk of developing vitamin D related diseases later in life. 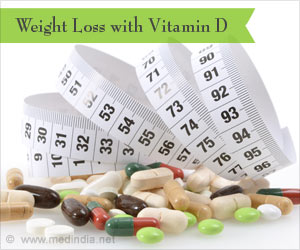 Weight Loss Combined With Vitamin D Reduces Chronic Inflammation Linked to Cancers
Chronic inflammation which linked to cancer in obese people can be effectively controlled by a combination of losing weight along with vitamin D supplements.
READ MORE