Cassava Rich in Iron, Zinc Can Improve Your Diet and Health 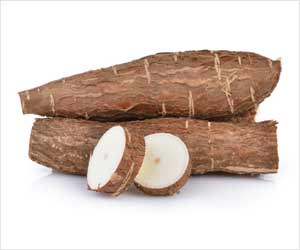 Biofortified cassava rich in iron and zinc can improve nutrition and boost the health of millions of people in West Africa, reports a new study. The findings of the study are published in the journal Nature Biotechnology.

The "hidden hunger" caused by micronutrient deficiency is a global threat to human health, with particularly severe impacts in Africa. In Nigeria, 75 percent of preschool children and 67 percent of pregnant women are anemic, and 20 percent of children below five years suffer from zinc deficiency.


‘Biofortified cassava high in iron and zinc can improve diets and health in West Africa. A new study suggests that field-grown cassava plants overexpressing a combination of plant genes can accumulate significantly higher concentrations of iron and zinc.’


Developing new varieties of a staple food crop with elevated levels of these two minerals could significantly improve diets and health.

The elevated mineral levels of the 'biofortified' cassava storage roots are retained after processing into common foodstuffs and are nutritionally available at levels that could have a significant impact on the health of cassava-consuming populations in West Africa.

"This work showed us that it is possible to raise the iron and zinc content of cassava roots while maintaining yield and other plant characteristics that are important to farmers and consumers," Taylor said.

"We also confirmed that the higher mineral levels don't disappear during cooking, which means that better nutrition can actually reach the dinner plate and the digestive tract." The research reported today took place over a ten-year period and involved more than a dozen scientists working in the laboratory, greenhouse and field locations. Cereal crops with higher mineral levels have been developed using the tools of genetic modification, but non-grass plants such as cassava take up minerals from the soil in a different way.

Ultimately it was a combination of two genes, IRT1 and FER1, from the model plant species Arabidopisis that led to cassava plants with iron concentration levels 6-12 times higher than conventional cassava and zinc concentrations that were 3-10 times higher.

"It was a real challenge to find a combination of genes that would raise both iron and zinc levels and maintain them under field conditions without impacting yields," stated the paper's lead author, Dr. Narayanan Narayanan.

To identify the impact of food processing on mineral levels in the biofortified cassava, researchers prepared gari and fufu, two common West African foods, by chopping, soaking, fermenting, pressing and roasting cassava. They found that high levels of iron and zinc were retained through these cooking processes and remained available for absorption in the gut following digestion. Ultimately the biofortified cassava could provide 40-50 percent of Estimated Average Requirements (EAR) for iron and 60-70 percent of EAR for zinc for children and women in West Africa.

"Biofortified cassava has the potential to improve the nutrition and health of millions of people in West Africa," said Taylor. "The higher iron and zinc would be present in every root harvested from these special plants, and therefore in every bite of food prepared from them."

Researchers in the VIRCA Plus project (cassavaplus.org) are now integrating the high iron and zinc trait into cassava varieties that are popular in Nigeria, with more field evaluations and assessments planned for 2019. Further development, testing and regulatory review are needed before iron and zinc biofortified cassava could be made available to farmers and consumers in the coming years.

Enhancing Provitamin A in Cassava Roots
A natural variation is found to enhance provitamin A in cassava roots employing transgenic or conventional methods.
READ MORE

Research Institute To Launch Bio-Pesticide Derived From Cassava Leaves
A team of researchers led by C.A. Jayaprakash segregated the insecticidal compounds from bio-waste that subsequently helped in the formulation of the bio-pesticide.
READ MORE