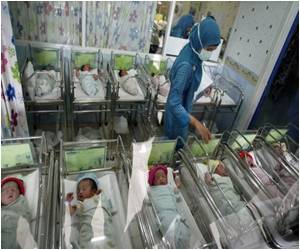 In the 1950s, careless use of a broad-spectrum antibiotic created a "hyper-virulent" strain of germ that worsened risks for newborn babies, according to detective work by French-led gene scientists.

Today's strain of Streptococcus agalactiae results from massive over-use of tetracycline in the post-World War II antibiotics boom, they reported in the journal Nature Communications on Monday.

Breastfeeding and skin contact after birth are a few simple ways by which most of the nearly three million newborn babies who die each year could easily be saved says Melinda Gates.
Advertisement

Strains of the microbe that were sensitive to tetracycline were wiped out, leaving behind a dominant, resistant superstrain that is dangerous for newborn babies without careful preventive care.


S. agalactiae is a common bacterium that colonises the intestines or urinary-genital tract. Between 15 and 30 percent of people carry the germ but the vast majority of them do not fall ill from it.

Findings from a successful three-year pilot program with the goal of improving the health of mothers and their newborns in Ethiopia has been published.
Advertisement
But the bacterium can be dangerous to newborns if they are exposed to it through infected fluids during delivery, be it vaginal or caesarean.

The new study unravelled the genetic code of 229 samples of S. agalactiae dating from 1950 to the present day, enabling the scientists to draw up a family tree of the bug and its evolution.

The probe revealed a "hypervirulent" strain called CC17 that began to emerge in the early 1960s, also coinciding with a worrying surge in GBS cases in America and Europe, affecting roughly one in three births.

"The use of tetracycline from 1948 onwards led in humans to the complete replacement of a diverse GBS population by only (a) few tetracycline-resistant clones, particularly well adapted to their host," the paper said.

Ninety percent of S. galacticae found in human samples are of this resistant strain, it found.

Lead investigator Philippe Glaser of France's Pasteur Institute said, "The impact (of tetracycline abuse) is being felt today, even though tetracycline is no longer in general use."

The risk from GBS is fought by screening the mother-to-be for the germ through swab samples from the vagina and rectum.

Doctors usually prescribe safe oral antibiotics such as penicillin or cephalexin to kill the streptococcus before delivery. In western countries, GBS infections today roughly once in every 2,000 births.

In a press release, the Pasteur Institute said the investigation highlighted the peril of mindless use of antibiotics.

"Tetracycline was handed out preventatively or for treatment for a wide range of diseases," it said.

"Today multi-resistant bacteria is a major problem, so this study shows the need to take into account the impacts from all prescribed antibiotics, not just in terms of the direct risk of resistance, but also on normal bacterial flora."

Researchers at Duke University have found that nurse home visits for newborn babies can cut down healthcare costs.
Advertisement
Advertisement